How to Implement Popup Menu Similar to That Used in Magit

I would like to create user interface in form of popup menu, popup menu similar to that used in Magit.

Popup in context of this question means little temporary window that contains collection of menu items so that user can select one and only one of these items.

Position on the Screen

The popup is allowed to appear in any part of the screen, but it's desirable that it should be quite obvious and thus it should appear beside currently active window.

Items should be displayed in form of pretty table. Pretty is context of the question means visually appealing, this effect can be most easily achieved by putting menu items into straight rows, see complete--insert-string for example. This paragraph serves for additional clarification, you can do it in your own way, this won't render your answer incorrect.

The selection is expected to be performed by a single key-pressing or, optionally with a mouse (although it's not that important so answers containing propositions that don't support mouse are legal). If you propose solution that supports mouse, please note that user should be able to select a menu item in an intuitive way, that is, by left-button clicking on desired choice.

N.B. mouse can be used in many ways and alternative ways to indicate a choice are also welcomed.

Once user has selected a menu item in a way described above, the buffer and thus its window should be eliminated from view as well as killed. The window that has been active before invocation of the popup menu should get focus (that is, become active) again.

Preferably, this consequence of actions should result in a Lisp object returned. The Lisp object can be either:

Alternative ways to let the rest of program know user's choice, or, possibly, its absence, are acceptable. However, if it's not clear how else it can be performed I ask all answerers improvise and don't ask me for further clarification of this aspect.

This is all for returned value. As for input parameters, they should at least include collection of strings which represent possible choices (that is, menu items).

Expected answer can be of the following forms:

† Alternative ways to abort the popup menu may include the following (but not limited to these):

magit-popup has it's own manual! But unless you actually want to set arguments in the popup which are then passed to the invoked action, you are probably better off using hydra instead.

Or since you too want to do it "from scratch", have a look at read-char-choice and go from there. To implement the visual part have a look at lv which is part of the hydra repository.

Hydras are pretty simple to write:

Hydra is a keyboard-centric interface, and in its basic form, it's not harder than easy-menu-define (built-in). And it's quite extensible if you want to make it do more complex things.

Just look at this twittering interface, the bottom window is a custom Hydra, not much harder to write than the one above: 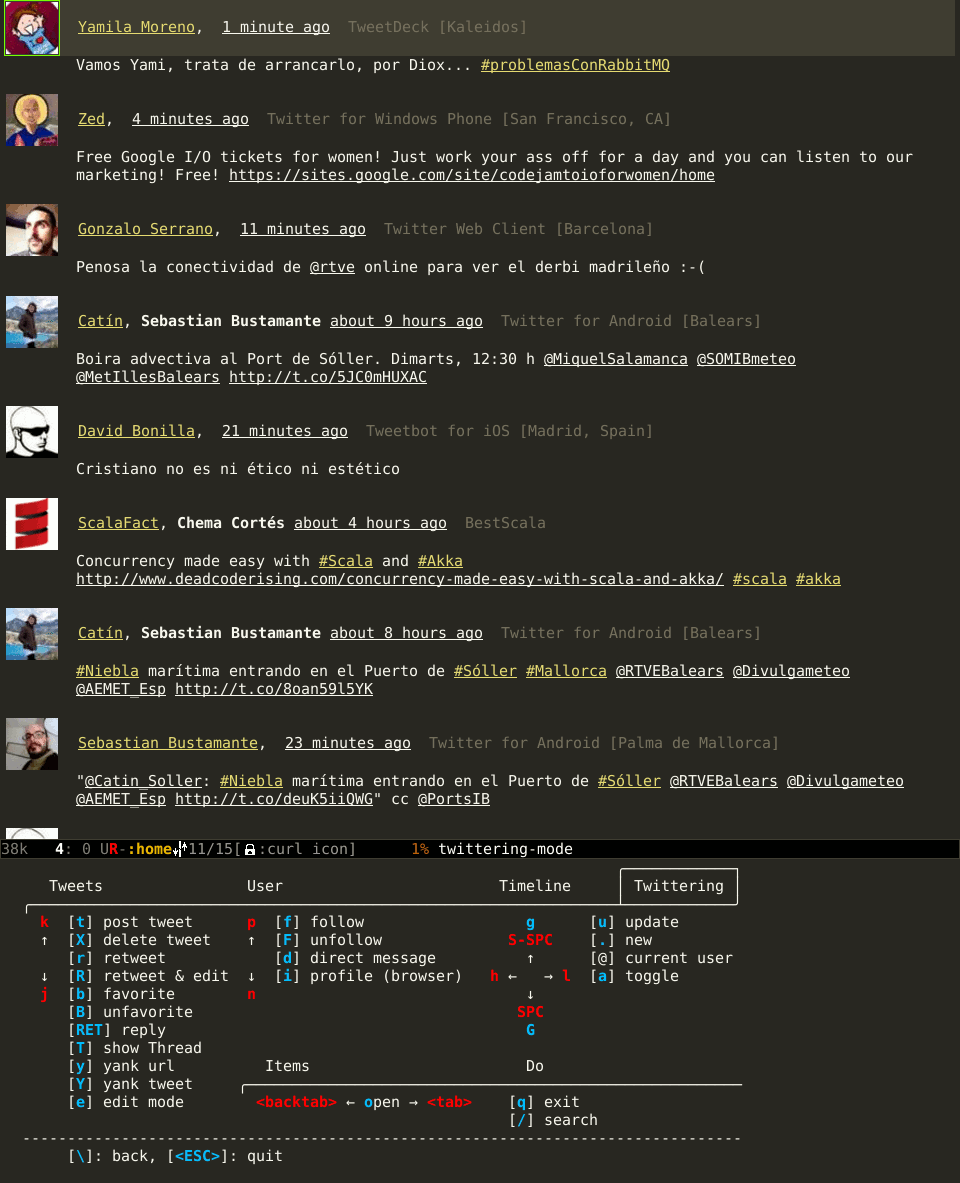 The code for this is available on the wiki, along with a lot more examples.

After some research I've found an idiom that can be used to create a window at the bottom (or indeed anywhere) of currently active window. This itself has effect of temporary, auxiliary window:

You can play a bit with action argument of with-current-buffer-window if you want the popup to appear in different part of the screen.

Quit function is described in doc-string of with-current-buffer-window, it can be used to get input from user. As @tarsius suggested, read-char-choice is a good candidate for experimenting.

The popup buffer itself can be generated just like any other buffer. I'm still thinking of buttons there, because user could use his mouse to select an item in the popup menu, not just keyboard. However, this requires additional effort if you want to do it well.

If your popup is a bit ad-hoc and you won't need it more than once, you can get away with this solution. Also, take a look at completion--insert-strings. I found it quite useful as an example of how to generate pretty rows of menu items, you can even use it unaltered if you don't need something special.

You can also create truly multiple-choice menus, that is, menus where a user can choose multiple items at the same time (choose a subset of the possible choices).

You might also be interested in looking at the package makey. It is intended to provide similar functionality as magit-popup, and it is a fork of the predecessor of magit-popup (magit-key-mode, mentionned in the comment) from when it was not yet a package available separately from magit.

Let me also mention discover : that is an example of how to use makey (and also its raison d'être). That package is meant to help newcomers discover emacs bindings.

Guide-Key work nice for me for all configured prefixes.

Based on @Drew's answer (Icicles), with modifications to separate menu implementation from menu data - so multiple menu's could be defined, each with their own: (content, prompt, default).

This optionally uses ivy (when available), which has more advanced features such as being able to activate items while keeping the menu open.

Example use, assign some actions to the f12 key:

Not the answer you're looking for? Browse other questions tagged magit popup or ask your own question.

2
How to use a menu to jump between sections of a document?
0
How to use ivy to navigate named locations of a buffer?

2
Always pop window into frames
3
What is the correct way to launch a long-running shell command from magit?
2
Magit version post-installation does not look as in the manual
0
How should I go about adding actionability to common interface elements (like commits)?
1
Magit popup set height automatically
1
Magit popup doesn't open in status buffer
0
Quitting a popup menu
0
How do I stop magit popups on commit?