How to edit elisp without getting lost in the parentheses

This should be easy! Add one conditional and copy/paste the concat. Piece of cake, right? I mean, I know what I'm supposed to do but I rarely touch elisp and I'm always daunted when I have to modify anything with lots of parenthesis.

The "correct" style, from what I understand, is to structure the code based on indentation and wrap the trailing parenthesis at the end of a line rather than on its own. Coming from other 'C' style languages, I struggle with both reading and writing code in this way. So my question is: what am I doing wrong? How am I supposed to edit elisp and navigate around the code such that I don't have to sit there and count every parenthesis?

When I work with something in elisp that gets too deep I have to shut my door, pull the blinds, and start positioning the parenthesis K&R-style so that I can not only read but modify the darn thing without freaking out.

Obviously I'm doing this all wrong. How can I touch elisp like this without fear?

Please note that my question is how to navigate and edit elisp not as a question on style. I am using the following as a style guide already: https://github.com/bbatsov/emacs-lisp-style-guide

How to properly format elisp before embarassing yourself on emacs.stackexchange:

For those wanting to know how to perform a right-justify for linum with a minimum width of two, here is the solution:

There are a number of add-on packages that might help, such as paredit, smartparens, and lispy. These packages make it easier to navigate and manipulate lisp code so that you can think in s-expressions and let the editor worry about balancing parens.

Emacs also has lots of built-in commands for dealing with sexps and lists that are worth learning and may help you get more used to the structure of lisp code. These are generally bound with a C-M- prefix, such as:

The example code you provided might be clearer if you fix the indentation: put point at the beginning of the (defadvice... and hit C-M-q to re-indent the entire expression. To replace the (concat... I would start by putting point at the start of that sexp and hitting C-M-o to split the line while preserving the indentation. Then add your (if..., and use the commands above to jump to the end of a list to add another closing paren, back to the beginning to re-indent, etc.

You might also want to turn on show-paren-mode, which will highlight the corresponding paren when point is at the start or end of a list. You may prefer to highlight the whole expression rather than the matching paren, so try customizing show-paren-style.

As @Tyler mentioned in the comments on another answer, you should take a look at the manual to learn more about these and related commands.

A good way to edit LISP is by manipulating the AST, instead of the individual characters or lines. I've been doing that with my package lispy that I started 2 years ago. I think that it can actually take quite a bit of practice to learn how to do this well, but even using just the basics should already help you.

I can explain how I would go about making this change:

The starting position is usually to have the point before the top-level sexp. Here, | is the point.

You'll want to have the code properly indented, so press i once. It will re-indent it nicely.

You'll want to mark "d " with a region, since a manipulate-able object in lispy is either a list, which doesn't need to be marked, or a sequence of symbols or/and lists which needs to be marked with a region.

Press at to do so. The a command allows to mark any single symbol within the parent list, and t is the index of this particular symbol.

To clone the string:

If you want to deactivate the region in a fancy way and put the point at the very start of the string, you can press idm:

Note that if you count out the code insertion, the only keys not related to AST manipulation were two C-f and one C-m.

You'll get used to it over time, but of course there's lots you can do to help speed it up:

There's a method to this madness. In lisp you can do this:

Suppose that 1 is really a large expression, and you want to indent it on its own line.

This is misleading. 1 is indented only one slot, even though it's an entire three levels of nesting higher! Better put it by its parent.

If we use this scheme on your own code, we get this:

This alone will help a lot. You can easily see the "shape" of the code, and most other languages have trained you to associate indentation with blocks and blocks with some form of nesting (either explicit or implied).

As an exercise, I've removed the nonessential parentheses from the code. You should be able to both read the code and supply the missing parentheses, given basic knowledge of Elisp (namely, what things are functions and values, and the structure of let*).

I'm including this as a different answer.

Sometimes, indentation will fail you. Your recourse then, is to use something like rainbow-delimiters:

This makes the nesting level of any paren explicit and easily scanned.

There is one pretty big problem though: the parens are ludicrously distracting. There's a balance of emphasis here. rainbow-delimiters will normally put a lot of emphasis on the parens at the expense of the rest of your code! But if you tone the rainbow faces down, they become progressively harder to scan.

If you can find one set of faces that balances this well, then by all means use it.

That said, one solution (the one that makes me cackle with glee), is to have two sets of faces, and switch between them on the fly. When you're doing other stuff, the faces are dilute and fade into the background: 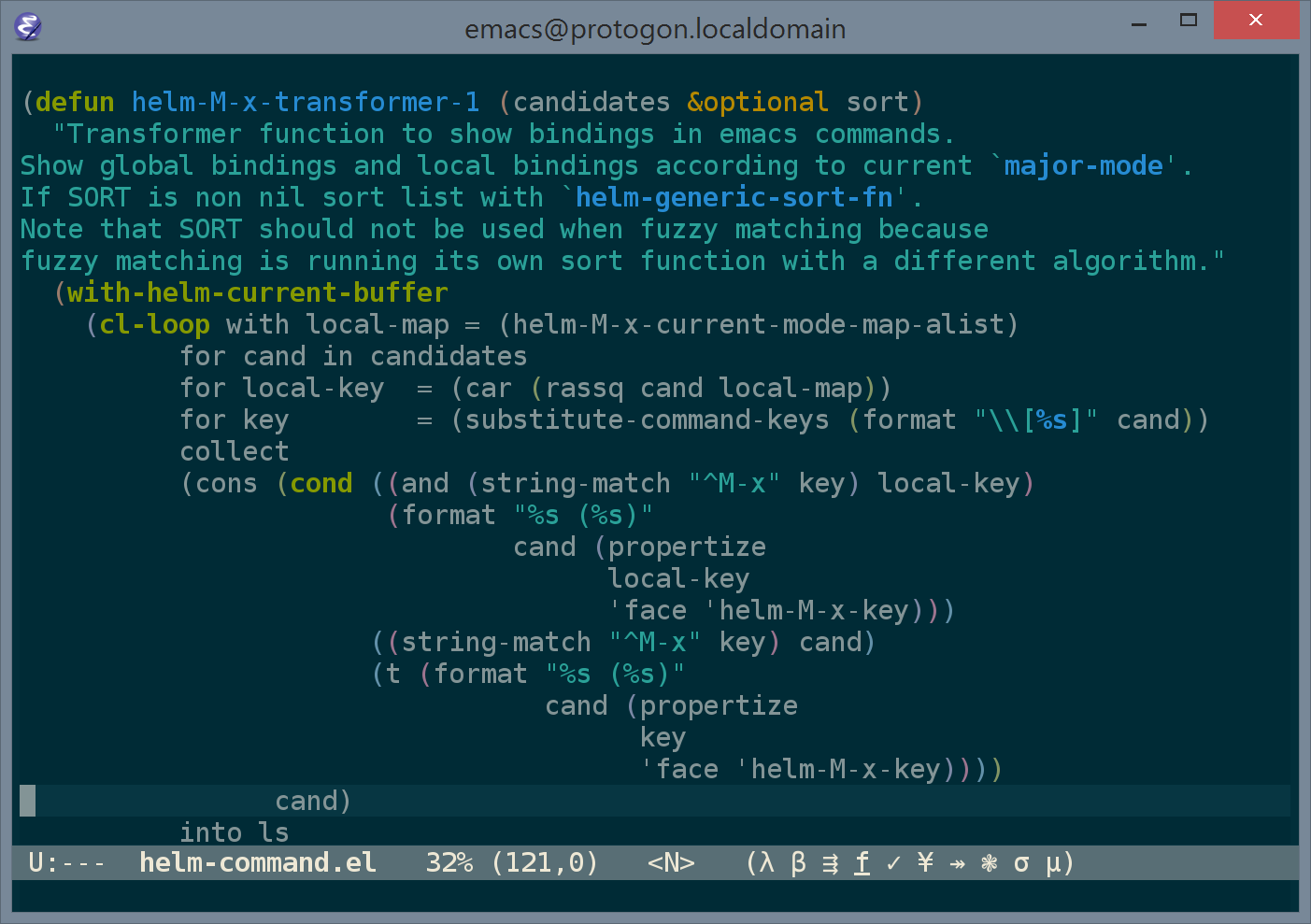 But when you put the point on a paren, it punches the parens so you can see the nesting levels: 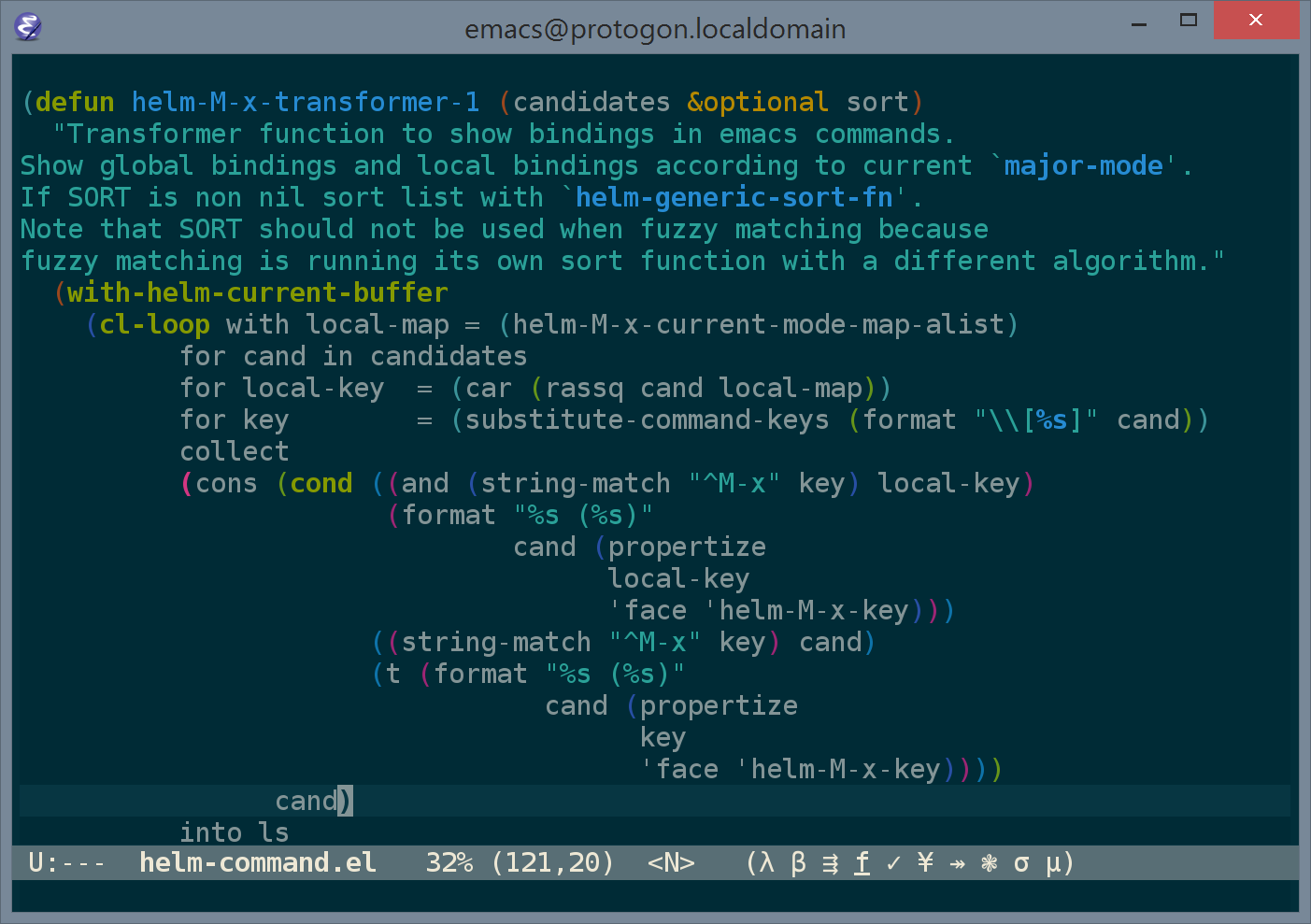 And here is the code to do that:

If you indent your code, then you really need to indent it properly. Lisp developers have expectations what properly indented should look like. This does not mean the code looks all the same. There are still different ways to format code.

I would expect that indentation shows containment in some way. But not in your code.

By default your code might be indented like this. Other answers described how you can do that with the help of Emacs:

I would expect that the let bound variables start on the same vertical column. I would also expect that the body of the let is less indented. We learn how a let should be indented. Once you train that a bit, it's a visual pattern that's easy to recognize.

The main visual building blocks in the code are the defadvice, let* and a bunch of function calls. The def in the name tells me that it is a definition followed by a name, an argument list and a body.

The let* would be: let*, a list of bindings and a body.

Which one gets used depends on how long the arguments are. We don't want to make lines too long and each arg on its own line allows us to have more structure.

Parentheses should directly enclose their constructs.

In Lisp, the parentheses have no language syntactic function, they are a part of the syntax of the list data structure (s-expressions). Thus we write lists and format the lists. For formatting the list contents we use knowledge about the Lisp programming language. A let expression should be formatted different than a function call. Still both are lists and the parentheses should directly enclose the lists. There are some examples where it makes sense to have a single parenthesis on a line, but use that rarely.

Use the parentheses to support you finding the expression boundaries. Let them help you to move from list to list, to edit lists, to cut&copy lists, to replace lists, to indent/format lists, select lists,...

For basic help with indentation, use TAB and "C-M-q" (indent-pp-sexp); binding "C-m" to newline-and-indent will save you having to press TAB after a newline.

You can navigate by sexp with "C-M-left/right/up/down/home/end", which is very useful.

If you're worried about maintaining parenthesis balance, use something like smartparens (it's a bit more forgiving that paredit, which can initially feel like wearing a straitjacket). It also comes with lots of bindings for navigating and editing at the sexp level.

Lastly, for highlighting parens, start by turning the option on (Options menu->Highlight matching parentheses, or show-paren-mode.) You can also use one of the packages mentioned by lawlist in his comment, like "highlight-parenthesis" or "rainbow-delimiters".

As an addition to what others have given as answers, here are my 2 cents:

I do not use electric pairing or rainbow anything or any other such "help". To me those are a bother, not an aid.

In particular, electric-pair-mode is, to me, an inconvenient bother. But some people love it. And I imagine that it might be helpful in some other pairing contexts besides Lisp parentheses (I imagine so, but I'm not convinced for such use cases either).

You will find what works best for you. The main things I want to say are: (1) automatic indentation is your friend, as is some way to spot the left paren that matches the right paren before point.

In particular, seeing what automatic indentation does for you teaches you immediately that you never again want to put right parens on a line by themselves. That style of coding, which is ubiquitous in other languages, is just noisy.

Besides the automatic indentation you get with RET and TAB, get comfortable using C-M-q. (Use C-h k in emacs-lisp-mode to find out what these keys do.)

The difficulty here is that you want to add some code before and after a certain sexp. In this situation the sexp is (concat " %" (number-to-string w) "d "). You want to insert the if-statement (if (> w 1) before it and the else-statement " %2d ") after it.

A major part of the difficulty is to isolate this sexp, personally I use the below command for isolating a sexp

Then add the appropriate code before and after this sexp, i.e.

And voila. The obtained code in this way is perhaps not beautiful but the chance of getting lost is smaller.

Not the answer you're looking for? Browse other questions tagged elisp editing programming or ask your own question.

14
How to view and edit large delimiter separated value files?
4
How to get a list of all the buffers in elisp?
3
Is it possible to reset the state of the Emacs Lisp interpreter without re-starting Emacs?
2
Elisp, can I pull-in (provide) a function & variable from a library without changing library?
13
How to edit crontab directly within emacs when I already have emacs open?
10
How can I answer a minibuffer prompt from elisp?
8
How to pass function as argument in elisp
2
Access to the elisp “commands” behind eshell commands?
4
how to direct an elisp defun to continue despite errors?