As I've read, eshell commands are just wrappers around actual elisp expressions. If true, everything I do in eshell I could do in an elisp REPL, right? Is it therefore possible to see what actual elisp is being invoked when we type in an eshell command?

The reason I ask is that I want to use org-mode's Babel. You can put elisp code in blocks and get results inserted after the block just fine. This is also true for regular shell (sh), but there is no way I know of running eshell commands as Babel "code blocks." So I'd like to have the actual elisp, which org-mode Babel handles in blocks well.

Is it therefore possible to see what actual elisp is being invoked...

Yes. They are all located in the eshell folder under Resources/elisp in the Emacs app folder. See screenshot of files on my computer. 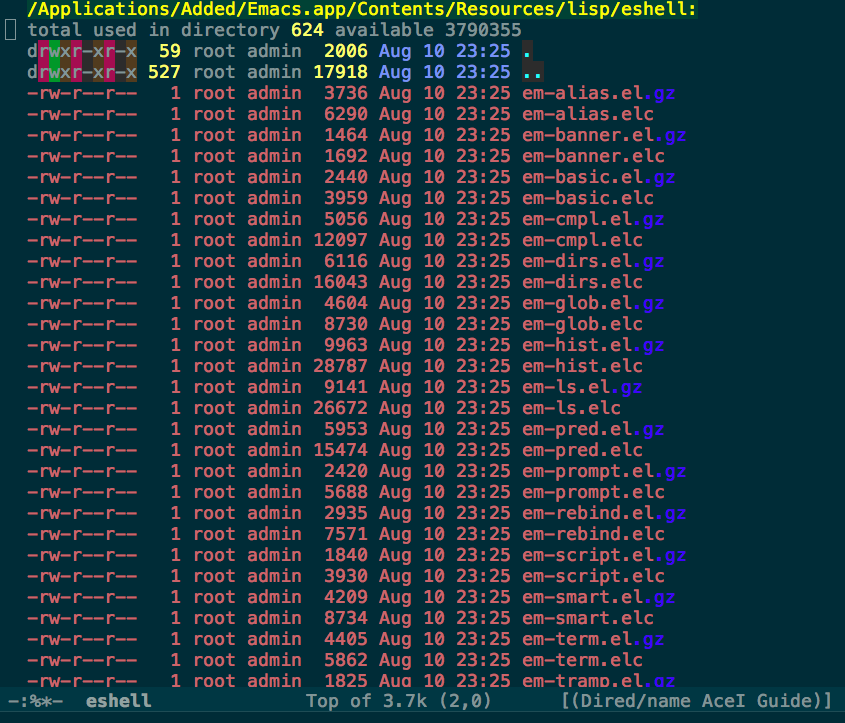 Open any of those files to see the actual elisp code. For example, ls command with its normal switches is implemented in em-ls.el file by John Wiegley and its core uses expand-file-name function.

How to find which lisp file provides what shell command? Open eshell prompt and then type, say you want to know where kill is in elisp:

will tell you that

What other commands are available in eshell?

there is no way I know of running eshell commands as Babel "code blocks."

There are no special eshell commands per se. Eshell mimics standard unix shell commands using existing lisp functions. You can invoke those same functions in org-babel lisp blocks without any mediating functions implemented in eshell.

I like having find-function bound to C-hC-f as a variant on the standard describe-function binding (via which you can also indirectly get to the code, FYI).

You could also use the following:

If you want to know what's implemented in elisp and what isn't, you could just ask Emacs to complete on eshell/

Not the answer you're looking for? Browse other questions tagged elisp eshell or ask your own question.

5
How to remove alias from the eshell?
8
How to programmatically execute a command in eshell?
1
Why don't rails commands run in eshell?
7
How to clear the eshell
2
Eshell-print only works when called from eshell
7
eshell-visual-commands with tramp
2
Where is the find alias in eshell?
4
How to mix eshell and elisp code
1
How to execute external commands from an Eshell script
2
Am I missing something on eshell piping to an elisp function?