How to set emacs to recognize backtick and tilde with a Colemak keyboard layout?

I've just installed emacs 24 on my Windows 7 32-bit OS. Usually, I activate Colemak keyboard layout and use it to do all sorts of typing (in browsers, spreadsheets or word processors). It works fine and has tilde (~) and backtick (`) on a key in the top left corner of the keyboard, between the Esc key and the Tab, at the left of key 1. 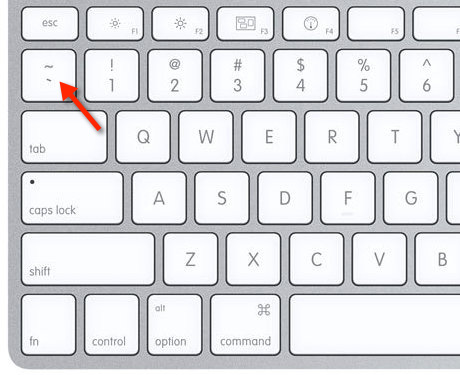 In emacs, most of the Colemak keys are recognized but that key doesn't work. If I press it, emacs' cursor stops blinking and after 4-5 seconds types 'sssssssssss' or whatever alphabet key I pressed after that key. For now I've managed to get tilde to work by putting (set global-key [f2] "~") and was thinking of associating F3 with backtick, but I was wandering if there's a way to make emacs recognize that key. That way I would get backtick by pressing the ordinary key and tilde by pressing it in combination with Shift.

I have downloaded the Colemak layout from the official Colemak Forum that caters to all users, whether on Windows, Linux or Mac. A zip file can be downloaded from section [5.1 DOWNLOAD AND INSTALL] of a thread titled "DreymaR's Big Bag of Keyboard Tricks - PKL/Windows Edition!". The decompressed zip file has some folders and files inside, among them a pkl.exe. I have placed a shortcut to this file, next to Windows' "Start" button and everytime I log into my OS I double click it and launch Colemak. The 2 most important files contained in the zip file are pkl.ini and layout.ini, the latter being inside layouts > colemak-eD_ISO folder.

pkl.ini allows one to set the locale or language of the keyboard by adding this line layout = colemak-eD-Lat_ISO:Colemak[eD]-ISO-It and commenting out any other similar lines so they don't interfere. The layout.ini allows you to customize certain keys. I, for instance, tweaked it to allow CapsLock to write capital letters just like it does in QWERTY.

Below are 2 "Display help images" that come with the colemak bundle. The first is Ordinary keyboard, the second one shows changes as Shift is pressed. They resemble very much my keyboard layout. As it turns out, it's the top left corner key that doesn't get recognized by Emacs.

The main reason why I need backtick to be recognized is so that I can use keyboard shortcuts in AUCTeX to get Greek alphabet. By default, to get the Greek letter alpha you can press backtick and a. This spurs EMACS to immediately substitute 'a' with 'α'. That's the use behind my question. I tried to work-around this problem by adding this line in my .emacs file: (setq LaTeX-math-abbrev-prefix "'") but writing words such as didn't or ain't became problematic since EMACS kept substituting the single quote followed by letter 't' with Greek letter 'tau'.

Somehow, but I don't know how, your Emacs is receiving the wrong keys, M-6 M-9 instead of ` and M-2 instead of ~. The easiest solution would be to translate those keys to the correct ones, but all M-number (being number a single digit numeric key) keys are bound to command digit-argument, which is a really useful feature that would be a pity to lose. This is why you get a long sequence of letters when you press a letter key after the backtick, they are 69, count them ;-)

Fortunately, also all C-number keys are bound to command digit-argument and, speaking for myself, I prefer to use C-number over M-number, so it won't hurt to translate M-2, M-6, and M-9 to what you need.

To restore the wanted behavior add the following code to your init file:

Not the answer you're looking for? Browse other questions tagged key-bindings keymap microsoft-windows or ask your own question.

12
Problem "<dead-acute> is undefined" appearing when typing Greek stress ( ' )
2
Executing emacs shortcuts when keyboard is set to Greek
8
How to preserve emacs key bindings when changing keyboard layout?
4
How to fix 'Wrong type argument: characterp, 134217782'?
0
Is the GPG signature of Emacs 26.3 still valid?
1
Can I use Right Alt/Ctrl Keys as Alt/Super/Hyper modifier keys of Emacs in Windows 10?
2
key binding isearch-forward with Greek keyboard