In atom, C++ files are well colored unlike emacs cpp-mode. Emacs does not highlight references to member variables, function calls or member functions. They all are uncolored.

The left is from emacs and the other is from atom: 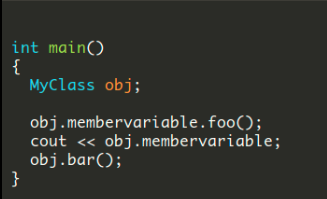 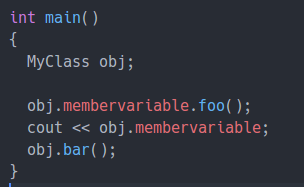 See, emacs does not syntax-color for variables and functions apart from their declarations.

Emacs does not utilize a semantic syntax highlighting system, neither does atom. I think such highlighting can be easily added using regexp like in atom.

I would like to add these coloring rules to emacs, however, I am just a beginner who does not know regexp and font-lock-mode.

Could you help me with this issue?

The Emacs one is actually better. Here's why, The purpose of syntax highlighting in text editors is not being pretty, but to make important code structures stand out.

If you look at the Emacs sample, you'll see 'MyClass' being colored in the 'type name' color and 'obj' in 'variable' color, which makes the important information that you have one variable 'obj' of type 'MyClass' in the current scope really stand out.

If you happen to have other local variables, member variables or function parameters, you'll see them colored in similar way. I personally think this helps a lot because I can easily see where are these variables declared and where are they instantiated in a glance.

The logic behind Emacs' syntax highlighting is that it doesn't highlight where you reference(use) symbols, instead, it only highlights where symbols are defined or declared. These are much more important and informative then symbols being used. Let's face it, other than declarations and keywords, almost everything else is some symbols being referenced. Coloring these only makes the screen messier and the really important things less obvious.

this seems to answer the member function bit of your question

Adding this to my init.el gives fairly good syntax highlighting for function calls and operators, it doesn't handle members though.

Not the answer you're looking for? Browse other questions tagged syntax-highlighting c++ c or ask your own question.