How to include a text verbatim in Emacs Lisp?

How to programmatically insert a text verbatim?

Of course one can use

to correctly insert \documentclass. But I am wondering if there is a way to directly insert a text verbatim without modifying it at all (e.g. without changing its special characters).

You may be misinterpreting what's going on. The insert function inserts its argument verbatim. The problem is that the string you've included in your program is not \documentclass but ␡ocumentclass where ␡ is ASCII character number 127 (which is unprintable).

¹ Sometimes backslash plus a sequence of characters.

Generally it is not possible, as elisp interprets all strings, and there doesn't seem to a way to prevent it doing so.

However in this particular example it is possible -- as elisp interprets \d as DEL char (ascii code: 127). So, assuming you string won't contain DEL chars by itself, one can search and replace it in emacs string representation. Generally it is possible to fight \a, \b, \d, \e, \f, \r, \v, \x cases: 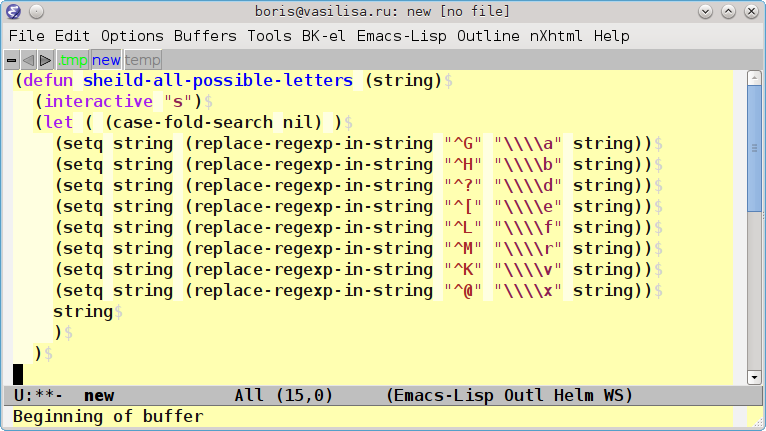 Here's a way to see how emacs sees the string:

Not the answer you're looking for? Browse other questions tagged elisp string insert or ask your own question.

6
How can I turn a string into its literal representation?

16
how to detect if inside a matched pair?
5
elisp: retaining data structure after inserting string representation to buffer?
12
What's the easiest way to implement a function like format-time-string
12
Ways to unobtrusively vary text rendering?
2
Why isn't (TeX-current-macro) a member of '(chapter section)?
12
How do i get rid of “default” (last used) string in some emacs functions?
13
How to edit elisp without getting lost in the parentheses
2
Using quail input-method to insert a string
0
Unescape elisp string