I have some python code, that has some long string literals containing more python code. These strings should most of the time be uniformly colored, as happens by default.

However, I would like to be able to some times narrow my buffer to any of these strings, and then have emacs syntax highlight them as if they were code, not strings within code (i.e. as if the """ weren't there in the original buffer)

Is there any way to do that, that does not involve lots of elisp?

NOTE: I do not need to necessarily need narrowing, just seemed better to change the syntax highlighting like that, as in the full buffer it would be confusing...

This can be done with polymode.

With this mode, triple-quoted strings are highlighted as python code. (Not normally a good idea, but you can toggle it). 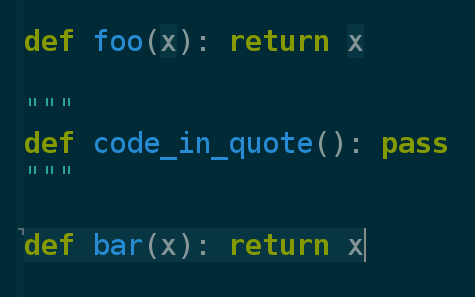 Currently, polymode seems to have issues updating the font-locking. However, this should work in practice.

Not the answer you're looking for? Browse other questions tagged python syntax-highlighting narrowing or ask your own question.

7
How can I prevent python-mode from occasionally highlighting everything as string
1
js2-mode: Highlighting and syntax checks only update when the buffer or mode is refreshed
7
Syntax highlighting fails on clone-indirect-buffer-other-window
7
Multiple major modes in one buffer (e.g., python-mode & LaTeX-mode)
0
communication with remote inferior python shell slowing down code editing
1
Syntax highlighting: highlight text followed by a pattern, but not the pattern itself
3
modify syntax table for strings in perl modes
10
How to syntax highlight Python f-strings so {...} uses regular code colors?
3
How to re-enable syntax highlighting of code that have been disabled by #if preprocessor statements