Q: how can I get ESS (R) to plot directly to an Emacs buffer?

When interacting with R through ESS, R defaults to spawning a separate graphics window outside of Emacs to draw its plots. (One can, of course, choose other graphical devices, which is how we plot to PDF, etc.) Two issues: first, the new window steals focus from Emacs, and second, it sure would be nice to keep everything nice and tidy within the Emacs ecosystem.

So: is there any way to plot "directly" (or even indirectly) to an Emacs buffer and, more importantly, do so without a lot of manual intervention by the user?

There had been some prior discussion in this old Stack Overflow thread, but the partial solutions proposed are not ideal. They mostly involve changing the plotting device in R (say, to PNG), plotting to a temporary file, and then manually visiting that file in an Emacs buffer. That all strikes me as very clunky, especially if the goal is to use the plot window/buffer interactively and draw many plots in a session (or add layers to them on the fly).

I'm speculating here, but it strikes me that, since both R and Emacs support SVG, that might be a useful format to use. However, it's not clear to me if/how one could hook into the R process to communicate on the fly. Is there a way to have R spit SVG code directly into an Emacs buffer, or would it need to go through the intermediary of a temporary file? How could one convince Emacs to visit a new temporary file automagically when R creates it, or update such a plot buffer when the temporary file gets updated/overwritten by a new plot?

Not completly an answer to the question, but when one use R in org-mode's babel:

Doing a C-c C-c on this in org-mode will create a *my-R* buffer with an interacting ESS buffer, create the plot in the example.svg file and then you can click (or press enter) on the created link to the file, that will open it.

Org-mode is able to inline image, but it do it when toggling this functionality (with M-x org-toggle-inline-images) or on opening the file, but not on running a code in it.

So this is not a complete solution.

I just posted an answer to the old post you are referring to in your question. As I wrote there, this may not work for you since it would be quite a dramatic change in your overall computer workflow.

But exwm, by allowing any non-emacs window to be an emacs buffer, allows to have R plots in emacs buffers which are controlled by the usual emacs settings and keybindings.

Here is an example of what this looks like: 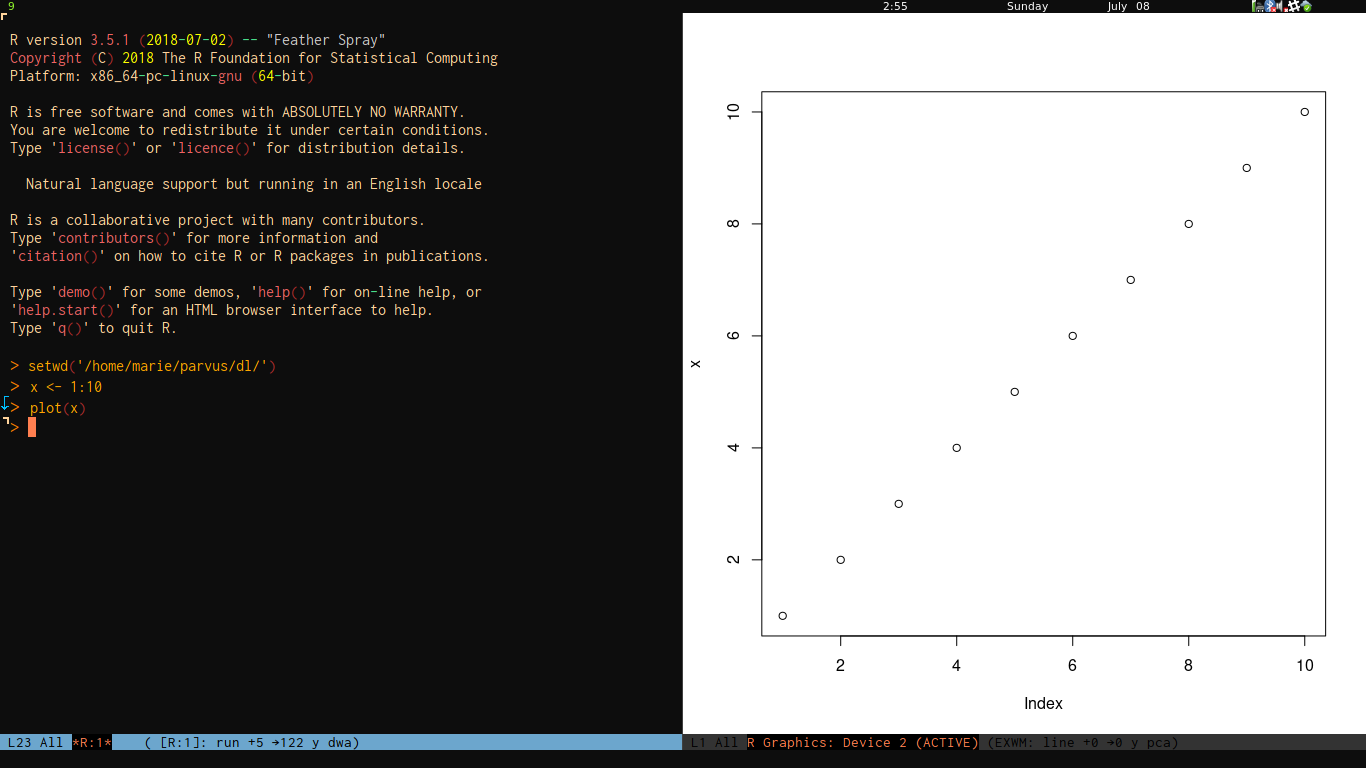 Not the answer you're looking for? Browse other questions tagged ess r or ask your own question.

0
Getting R to Display Graphs in Emacs Window

5
New frame does not respect default font
1
emacs opens ESS/R buffer in random window
5
How to display *help* buffers below one specific window?
5
Can we get inline results with polymode for Rmd files?
7
Emacs busy while evaluating R in ESS
2
emacs ess apply function to token under point
1
ESS: Turn off [TRUNCATED] in ESS R session