How to test REST API with Emacs?

I'm putting together an app, and want to be able to test the api end points. I figured Emacs would be a cool way to go - especially if JSON responses could be parsed and the return data used in subsequent tests.

Any ideas on how to go about this, or is this just crazy?

Old question, yes... But in the event that anyone Googles this; another option is using Org Babel and ob-http... (Can be installed from melpa.)

With org-babel, you can make an .org file containing "http" code blocks. When these blocks are evaluated, they will make the HTTP request and return the response as the result.

If these blocks have a "#+NAME:" attribute, you can use their results in any other org-babel block. This allows for some pretty neat literate programming using the results of HTTP requests.

For example, here is a little Org document demonstrating making an HTTP request and parsing the returned JSON in Ruby: 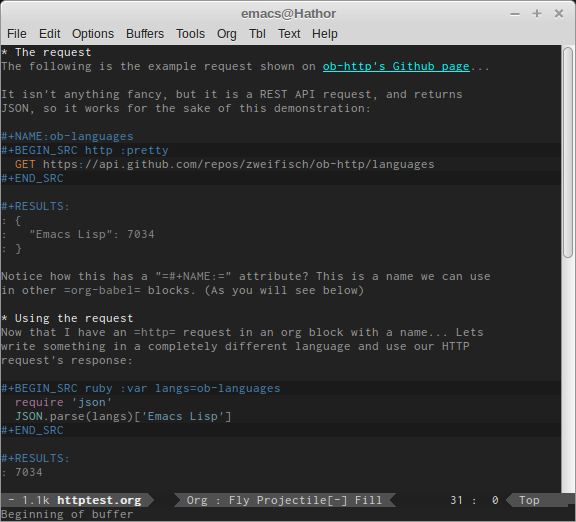 Hitting C-c C-c on the bottom block (The Ruby one) will automagically evaluate the top one for its dependency (That's the :var bit in the block's header.). This will mean that the http request is made first, and then the results are passed to Ruby for further processing.

If this suits your needs, ob-http requires a little bit of manual tweaking after you install it to get it working. (Don't worry, it isn't that much)

So, by running M-x customize-variable, you can customize each to include the following:

org-src-lang-modes: You will want to customize this variable to include one more language mapping, so you can insert one more value to the end of the list:

Then you can C-x C-s to save that customization.

org-babel-load-languages: You will want to add one more item to the list of enabled org languages. "http".

Though, you might need to add it to the list manually if the option is not in the possible options, you can do that by clicking "State" and choosing ":" to show the Lisp expression... Then you would add the following just before the last closing parenthesis:

After that, a quick C-x C-s and M-x org-reload should be all you need..!

I wrote httprepl for exactly this purpose. It gives you a comint-based repl where you can issue http requests.

You can easily add functions that consume the result of requests. These are usually used for pretty printing etc but parsing to an elisp structure should be simple using the builtin json library.

I recently wrote a package for this:

It's inspired on the restclient package, but tries to improve upon some of its core ideas. The requests are written in an Org buffer, where requests found in higher level headings inherit properties from the ones in lower levels. This way, you can avoid writing common properties shared across many requests multiple times. It also has integration with Babel.

It's perfectly possible to do because I do almost exactly that same thing myself. There are a couple of caveats though. First of all I have a locally patch xmlrpc.el library. This solves two problems, an incompatibility with modern emacs and the ability to pass authentication headers in the request. The data I'm processing is JSON in XML but you may be able to skip the XML step depending on your setup.

All the heavy RPC lifting is done in lava-rpc.el but it shouldn't be hard to follow. You can see the call to submit a stringified piece of json here.

Not the answer you're looking for? Browse other questions tagged package or ask your own question.

9
How does emacs manage its packages?
13
Why does emacs come packaged with games and amusements?
7
how to programmatically load packages in .emacs file
5
package.el asks whether I want to save modified files before package installation. How to disable this?
7
How should I bundle json with my elisp package?
11
How to automate installation of packages with .emacs file?
6
How do I work out what the problem is with the emacs package system?
2
How should I test that autoloads work properly with package.el?
1
Launching emacs with configured packages