I'm currently trying to learn org-mode in OS X.
And I found there's a keymap "M-S-RET".
But "S-RET" is not recognized in the iTerm2.
It seems like terminal interpret "S-RET" and "RET" as same.
But, iTerm2 can bind a "S-RET" in the GUI preference tab.
(PREFERENCE->PROFILE->KEY)
And I can bind "S-RET" and send hex value instead of 13.
(13 is keycode for RET) 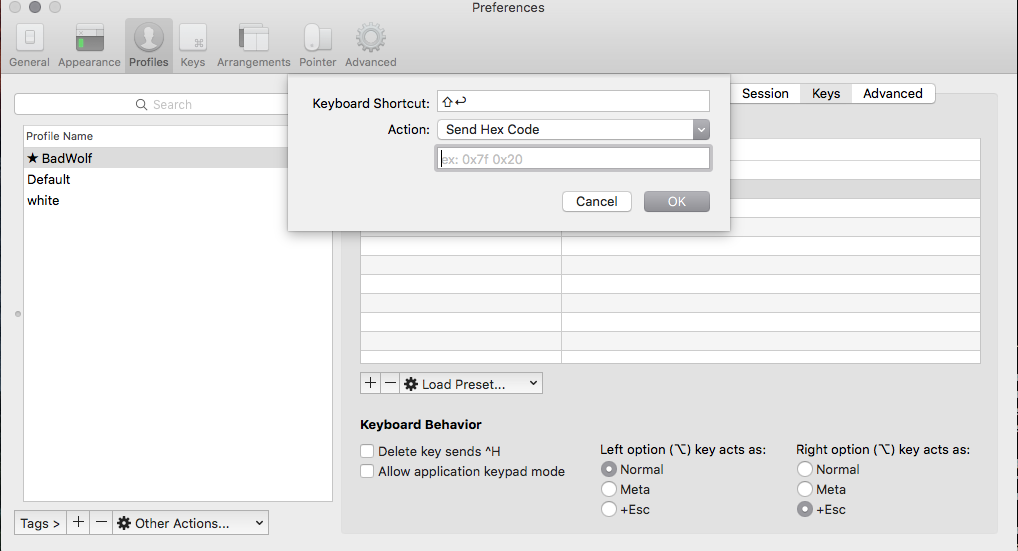 But I can't find what's the keycode for the "S-RET".
Actually, I think "Shift + Enter" is not exist as a keycode.
However, there must be some key combination that Emacs uses.
How can I figure it out?
Are there any files containing that information?

Thank you for reading.

There isn't really a standard escape sequence for Shift+Return. You could say that there are two standards, but each of them is only followed by a small number of terminals:

But Emacs only activates them if it can figure out that the current terminal sends them. Since iTerm2 doesn't send them by default, Emacs doesn't activate them.

You might as well use one of these sequences. To activate them unconditionally, put the following code in your init file (this code is from terminal-init-xterm in term/xterm.el):

For more information and some explanation of these escape sequences, see Problems with keybindings when using terminal

Not the answer you're looking for? Browse other questions tagged org-mode key-bindings keymap or ask your own question.

32
Problems with keybindings when using terminal

5
Why does local-key-binding return a 1 for a key with no local binding
5
Is there a more convenient key binding for RETURN?
8
Why I can't bind Shift-<backspace>?
2
How to set emacs to recognize backtick and tilde with a Colemak keyboard layout?
11
What is the select word/symbol function bound to <double-mouse-1>
2
Trouble binding C-return: C- must prefix a single character
1
Swap Shift/non-shift key behavior for particular mode
6
Specifying a binding for control shift tab?