Surprising glyphs for some characters

I am experiencing font issues for a few specific characters, namely the "SYMBOL FOR …" family, which are textual representations of control characters such as NUL, BEL, BS, etc. 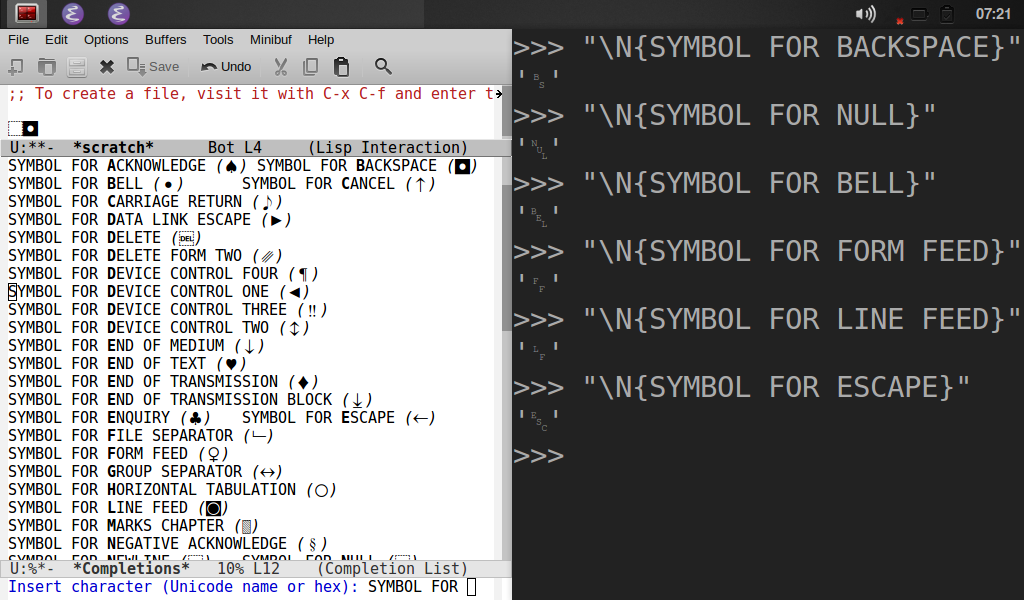 Not shown: a file containing some of these characters, opened with the Geany text editor. Geany displays the same glyphs as Terminator.

While the symbols on the left are rather cute, I would rather have Emacs show the same glyphs as Terminator and Geany. I have no idea of what causes this though. Terminator and Geany both use the Monospace font, but customizing Emacs's default face to Monospace does not change the situation. I do not know yet whether the issue comes from:

C-u C-x = on e.g. SYMBOL FOR NULL has this to say about the character:

Note that emacs -nw is unaffected, i.e. the characters on the right side of the screenshot are shown. I guess Terminator takes care of font selection in this case? 🤷

I would appreciate any input on the subject. I do not know whether this warrants a bug report, since for all I know my whole setup is working "as intended" for some value of "intended".

PS: I tried to reproduce on a Xubuntu 14.04 machine, and saw intricate glyphs composed of a square box, featuring the acronym (e.g. NUL, BS) in the bottom half and the weird symbol (e.g. heart, spades) in the top-right corner (could not take a screenshot unfortunately).

PS2: now that I've copy-pasted the above code-block in Firefox (49.0), I can also add that Firefox uses the same glyph than Terminator and Geany.

Fonts are harder than they look, in general. If you look at the details you pasted from Emacs you'll see that it actually used Symbola, not Monospace, to render that character. Probably the Monospace font didn't have any glyph for that character, and it had to go find a different font for it. Luckily you can tell Emacs which font to fall back to for a character range. You'll want to use the set-fontset-font command, as described in the answer to this previous question: https://stackoverflow.com/questions/6083496/how-do-you-specify-a-fallback-font-in-emacs.

Oh, and when you run Emacs inside of a terminal of any kind, Emacs loses all control of what fonts get used; the terminal renders all text in that case.

Not the answer you're looking for? Browse other questions tagged fonts unicode or ask your own question.

8
Force a single font for all unicode glyphs
5
Easiest way to render an overline in org mode?
1
detect unprintable glyph (aka "no font available") programmatically
1
Displaying some characters with all-icon instead of my current font
2
Override the default font for emoji characters
0
How can I force a Hebrew font to match the fixed width of Latin text characters in a mono font