I consistently get the following problem on Emacs 24.5.1 with folding package (version 20140401.3) for which I've found a workaround but would like to understand what was going on.

As you can see in the screenshot above, the emacs server started OK, but when I try to launch the emacsclient it just hangs there: 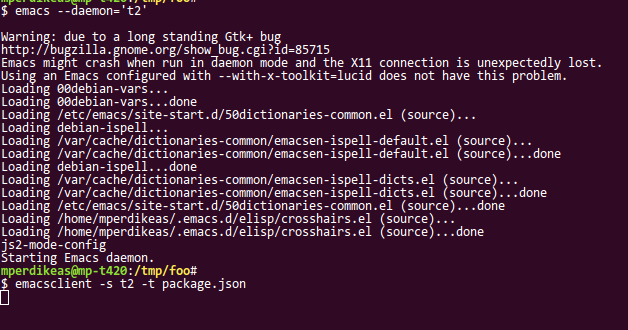 … after killing emacsclient with Ctrl+C I get into a situation where nothing is echoed on my terminal as I type a command and, moreover, the command's output is mangled (line feed characters are apparently missing):

Upon further investigation I noticed that this behaviour was dependent on the type of file I was trying to open with emacsclient. Some files triggered it, some not. Further digging pointed me to a message emitted by the folding package (version 20140401.3) when I was trying to open the offending files.

The message on the mini-buffer read:

Folding error: mode is not in `folding-mode-marks-alist'

Upon adding the single line marked as "line-A" in my .emacs the problem went away:

However, even without the fix, directly opening the file using emacs (not emacsclient) does not result in this behaviour. Something a lot milder happens: the file is not placed in the buffer that's currently opened. Instead I am presented with the *scratch* buffer and the file I asked to open is placed in another buffer. This is what I see when I press C-x C-b:

… so I just use C-x C-b and navigate to my buffer to bring it up. And there is no mangling at all at the terminal. This leds me to believe that the problem may also be related to emacs daemon / emacsclient.

Browse other questions tagged code-folding emacs-daemon or ask your own question.