How to make cursor stop at the last character of a line instead of at the linefeed character? I use evil-mode.

Steps to reproduce the issue: 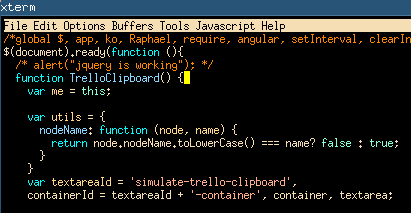 UPDATE: Thanks guys. It turns out it's not a bug but just default behavior of Emacs.

My issue is actually I'm using evil-mode and I mistakenly turn off a useful feature of evil.

Here is the CORRECT setup code to turn that flag on in evil-mode:

(This is too long for a comment, and while not literally an answer, I hope it might help the OP.)

While Drew's answer covers what you literally want, this is probably not what you need. Point in Emacs is never on a character, it is between characters:

Of course, both the display and some commands might mislead you. For instance, what-cursor-position

shows information about the current cursor position and the buffer contents at that position [...] After Char:, this shows the character in the buffer at point.

I am not sure whether the wording "at that position" and "at point" in this excerpt are bugs in the manual or not; I would consider reporting them with e.g. M-x report-emacs-bug.

Bind C-e to a command that puts the cursor one char to the left of the line end.

(Although I cannot imagine why you would want to move the cursor there.)

Not the answer you're looking for? Browse other questions tagged cursor newlines motion or ask your own question.

1
Strange cursor behavior with text property invisible
1
How to return to the place of the last inserted character?
1
Calculating cursor position excluding the overlay after-string
5
How to move by whole line rather than within a wrapped line (emacs 23.1+)
3
How to jump up or down to first non-whitespace character in same column
3
Move to the beginning of a heading smartly in Org-mode
1
Unable to change cursor type in terminal
3
New line in cursor-intangible area and line-beginning position
2
Make evil paragraphs behave like vim paragraphs
0
Emacs cursor border hides the character