I configured Emacs on one computer and copied ~/.emacs to a different computer. That other computer uses a newly installed operating system.

Both computers run Ubuntu 16.04 with the latest updates installed and both run Ecmacs 24.5.1 from the Ubuntu repositories.

When I opened a LaTeX document, I got this warning: 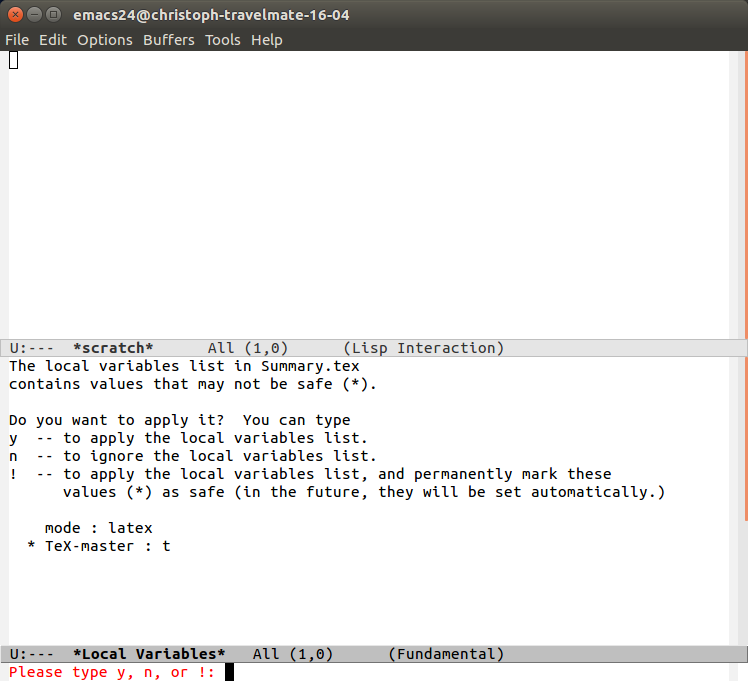 I created that document on the first computer using Emacs. On that computer, Emacs always puts this in the end of every LaTeX file (after \end{document}):

There is is suspicious t.

I didn't go into Emacs package manager and install anything (like AUCTeX) yet, on the computer with the fresh installation. Still, LaTeX files are opened in LaTeX-mode.

When I typed a ! as my response to the warning mentioned above, this was added to ~/.emacs:

Then, that warning went away on subsequent attempts. But there isn't even such a warning in the first place on the first computer, even though the ~/.emacs file was exactly the same.

There are other differences. Like when I press C-c C-c in LaTeX-mode to build the PDF, on the first computer, that's all that happens. On the new one, a buffer frame and a buffer are created, containing the pdflatex command which was used to build the PDF and its console output.

Upon pressing C-c C-c on the first computer, the mini buffer says:

On the second one, it says:

I understand that pdflatex is a program with an equally named package (in Ubuntu) and an equally named command to call it. But why is the default on the first computer LaTeX? That is to say: Where is it configured?

Can someone please explain what's going on? If I want the exact same Emacs configuration on both computers, how should I go about it?

This is my ~/.emacs file after the change described above occurred:

/t (mentioned in the code above) exists on both computers and in both cases is a symlink to a folder (which even is in the exact same location on both systems).

On the first computer you have AUCTeX installed, on the second one emacs is using its default mode for editing tex files.

Not the answer you're looking for? Browse other questions tagged latex config configuration-files or ask your own question.

2
Opening latex files works on one computer but not the other
16
Reducing LATEX_HEADER clutter at the top of my org files
2
Emacs Org-mode + Letter class = Unknown latex class 'letter'
6
Efficient workflow to write a book in Org-mode
1
Org Latex preview produces empty box when I use a certain package, how can I debug the issue?