Unable to use git in shell inside a buffer

I used 'M-x shell' to start a shell inside a buffer. Then I tried to run git diff 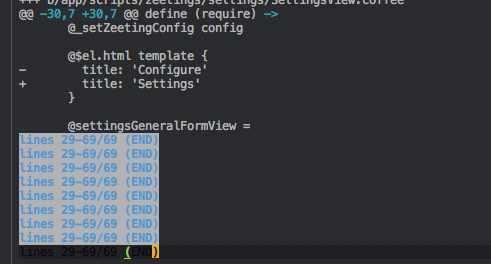 After I press the space bar a few time, the lines 29-69/69 line is printed a few and the shell has stopped responding.

Why it is the case? Is there anything to fix it?

Did not see this error message when I used shell last time:

Now I am not able to use git diff at all.

M-x shell is a dumb terminal, whereas it looks like the commands you're using expect a more fully-featured terminal. This is what the "WARNING: terminal is not fully functional" messages are about.

To circumvent the general issue, you could use a proper terminal emulator instead of shell-mode. Emacs has one built in: M-x term (or M-x ansi-term).

Note that git might just be wanting to invoke a pager. So another approach would be to tell git not to use paged output, via the GIT_PAGER environment variable, or the core.pager git config option.

You could test this in the shell like so:

or using the environment variable:

or configure it permanently:

Not the answer you're looking for? Browse other questions tagged spacemacs osx git or ask your own question.

6
Auto refresh buffer upon git checkout
13
How can I use emacs with git within the terminal?
0
Open set of buffers based on git branch
0
How to remove git stashes when inside magit-status
0
How to use OSX command line GUI emacs as git $EDITOR
3
Cannot get Magit to show the commit signatures in the log
1
Mac stopped binding CMD-Up, which I use in Emacs and Racket
3
Emacs 26.3 crash on network/process interaction on macOS
0
How do I modify magits behavior to use the date that I finalize the commit and not the date that I start the commit
0
Cannot paste text copied from Emacs to synchronous subprocess