I am looking for an easy way to gather blocks of text that are scattered throughout an emacs or org-mode document and move (or copy, but move would be preferred) them to a single location.

(For example, reorganizing thoughts in an org-mode outline, where items that had been sub-entries of various different sub-outlines are to be gathered under a new heading as a new point.)

I don't see, however, how to get yank to continue appending entries from the kill ring at point. (I see I could accumulate in another buffer, but isn't there a default key binding just to yank successively at point?)

Any thoughts either on accomplishing the specific kill ring objective, or my ultimate goal of moving scattered text will be appreciated.

A fourth option is optimized for ease of yanking, at the cost of a little forethought during the killing phase. We use append-next-kill (C-M-w) before the second and each subsequent kill operation. This means that all the killed text is amalgamated into the same entry in the kill ring. So a single C-y is all that is needed to yank it all back at the new location.

Note that only a single C-M-w is necessary before a sequence of several C-k. The same is true of other kill commands, such as M-d.

Here is the doc string for C-M-w:

Cause following command, if it kills, to add to previous kill. If the next command kills forward from point, the kill is appended to the previous killed text. If the command kills backward, the kill is prepended. Kill commands that act on the region, such as kill-region, are regarded as killing forward if point is after mark, and killing backward if point is before mark.

If the next command is not a kill command, append-next-kill has no effect.

The argument is used for internal purposes; do not supply one.

There are at least two ways of approaching this.

A third option is to use the Paste from Kill Menu item in the Edit menu. On macOS, with no customization, it looks like this 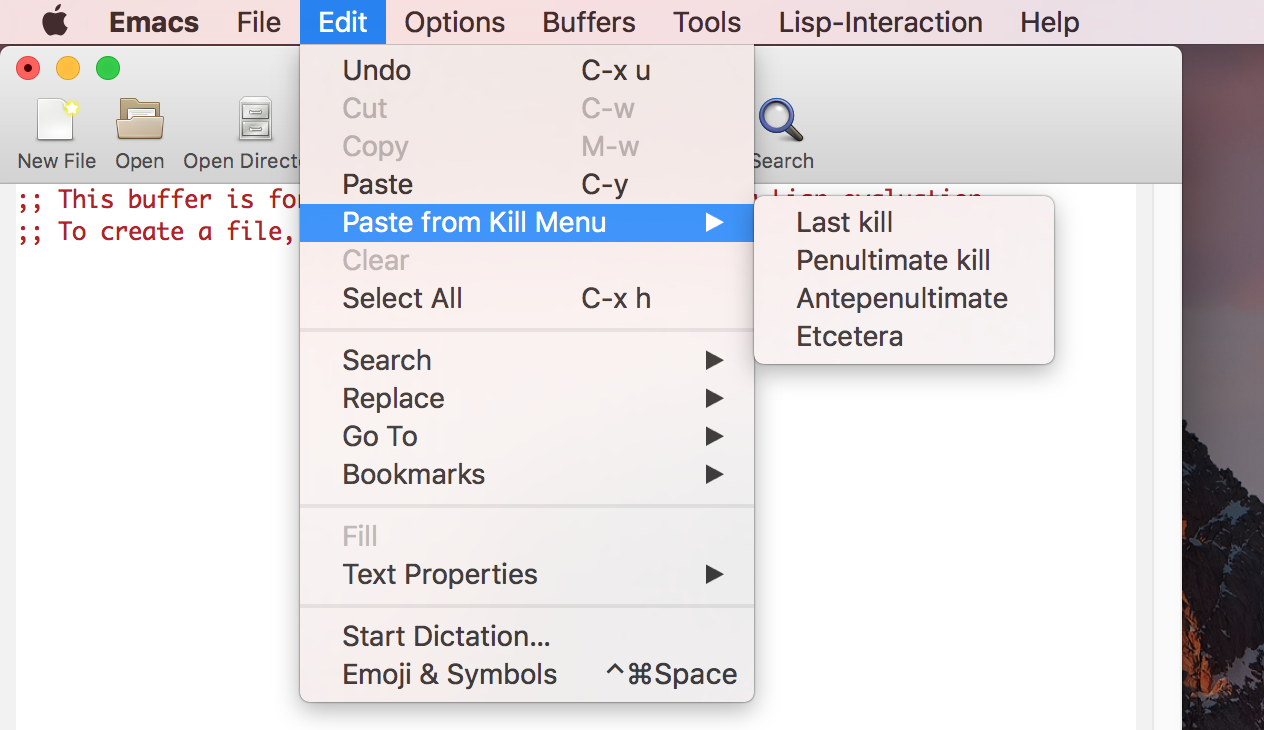 Personally, I hardly ever use the menus and have disabled most of them, but I do keep the Edit menu around especially for this, since it avoids having to remember where you are in the kill ring.

If you want to quickly and directly access any given element of the kill-ring and yank it then there are various options. I'll mention a few.

A fifth (and final, from me) option is to use mouse-drag-secondary-pasting from mouse-copy.el. Here is an animated demo:

You just select text with the mouse/trackpad while holding the meta key down, and on the up-click it automatically yanks itself at the point position. No need for any key stroke.

This is especially suited to macbook trackpads – it combines well with 2-fingered scrolling, which is a great way of navigating in the non-selected windows of a split frame (without selecting them). Here is an example of how it can be set up:

Note that I modify the function to deal with a couple of minor annoyances with the original: (1) avoid copying invisible text properties; (2) remove the secondary selection overlay as soon as I am done.

Not the answer you're looking for? Browse other questions tagged org-mode yank kill-ring or ask your own question.

14
How to copy text without losing selection?
7
In Evil mode, how can I prevent adding to the kill ring when I yank text, visual mode over other text, then paste over?
10
How do I yank and cycle backward through earlier killed text?
0
Accidental yank or paste into org buffer
0
Function to duplicate and mark duplicated text
2
Quickly capture location
2
Removing unwanted colors (and other decorations) from yanked text
2
How to have yank visually flash the pasted text