When typing a number in spacemacs all kind of numbers are being suggested. I can autocomplete them with enter. I like this behaviour in the case I'm typing words (made up of letters). But I don't want this behaviour when I'm typing numbers. 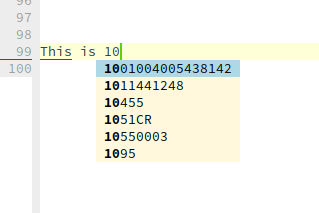 To avoid the 10 being expanded, I can type a space and after that an enter. That's the way I handle this at this moment.

However I just don't want numbers to automatically expand.

What functions or strings can I put into my .spacemacs (or init.el) to prevent numbers, and only numbers, from being suggested (and consequently being expanding when I type enter)?

It seems to be as simple as:

I got this far by studying this q&a: How can I prevent company-mode completing non-English chars?

When this drop-down menu for numbers completion appears, typically the mode-line would show the company backend which is causing this completion. You can remove this backend from the list 'company-backends.

E.g. if company-dabbrev is doing it,

Alternatively, you could prevent company from completing without your consent by setting company-idle-delay to a large number. Mine is

Not the answer you're looking for? Browse other questions tagged spacemacs completion company-mode auto-complete-mode or ask your own question.

1
How can I prevent company-mode completing non-English chars?

7
Yasnippet not working with auto-complete-mode
2
Company mode completely unresponsive
5
Yasnippet expand snippet automatically instead of prompting possible completions
9
Have Ctrl-a increase a number just like in vim
1
Company completion in Elixir with lsp-mode/eglot not working as expected
1
How do I search the auto-complete options?
0
Turn off auto-completion/company while in org-journal