Setting up emacsclient on MS windows

I am trying to set up the emacs server daemon and use emacsclient on MS Windows so that files can be opened quickly without the delay and overhead associated with starting additional instances of emacs for each file opened. I am following the specific instructions provided in emacswiki for MS Windows which involves:

Starting the daemon succeeds (I see emacs.exe in the process list), but invoking emacsclient produces errors. The wiki says to create a shortcut to emacsclientw.exe and change the target to

Is this correct? It looks like the client is invoked twice. Using the target as shown does not run the program and produces the error "file name or argument required". Using only the first part of the target shown above

produces a generic error. Using only the second part

produces the error "No socket or alternate editor." (The official emacsclient options are described here.)

Any suggestions? Emacs runs fine in standard mode, that is, not in daemon mode. Version 25.1. I would prefer to run the daemon rather than starting the server in my initialization file.

I am not so sure about the advice in the emacswiki page. What you want to do is to the following:

The command I use is

The -n means don't wait for the client to finish when you're launching from command line. The -a allows you to specify an alternative editor if the emacs server isn't running, but if you give it an empty string, it will try to start the emacs server and connect to it. Finally, if you're putting this in a windows shortcut, you want to also add a -c which will open a new frame (see emacsclient options).

Here's my shortcut, it works for me (on windows 7, emacs 25.3). I don't know why the emacswiki page put another invocation of emacsclientw as the alternative editor that makes no sense.

I should add that when I try to omit the -c option when running as a shortcut, it gives an error. 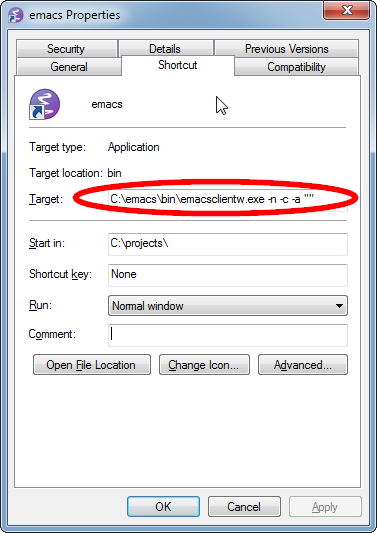 When you add Emacs executable into PATH, you can easily open emacsclientw.exe from anywhere. Also you can add daemon in startup folder: C:\Windows\System32\cmd.exe /c start /high emacs.exe "--daemon"

The command I use is:

(If the Emacs bin folder is not on your PATH, use the full paths for emacsclientw.exe and runemacs.exe.)

or with the short option names and the empty string trick,

Note that the empty string trick for -a will start the daemon if it isn't running, but this isn't supposed work until Emacs 26 (I'm still on 25). Before 26 you have to specify the alternative editor explicitly. I used runemacs.exe, but my Emacs is configured to start the server and leave it running.

Because Windows lacks the local Unix domain sockets emacsclient normally would have used to connect to the server, it has to fall back to using a network TCP socket. For obvious security reasons, you don't want just anyone on your network to access your whole file system via the Emacs server. Thus, emacsclient must know the right (ephemeral) port and security token written in the server file before the server will allow it to connect.

If the server is already running, then you shouldn't need the -a (but it doesn't hurt). You could set the ALTERNATE_EDITOR environment variable instead of using -a.

If you set the EMACS_SERVER_FILE environment variable, then you don't need to specify it again with -f.

After next reboot plus a few seconds, doubleclick on link, here you are.

I found the code of Emacs.vbs somewhere, but lost the link.

I encountered the connection problem too. And I try to fix it by the steps below.

This picture is the search results on my machine: 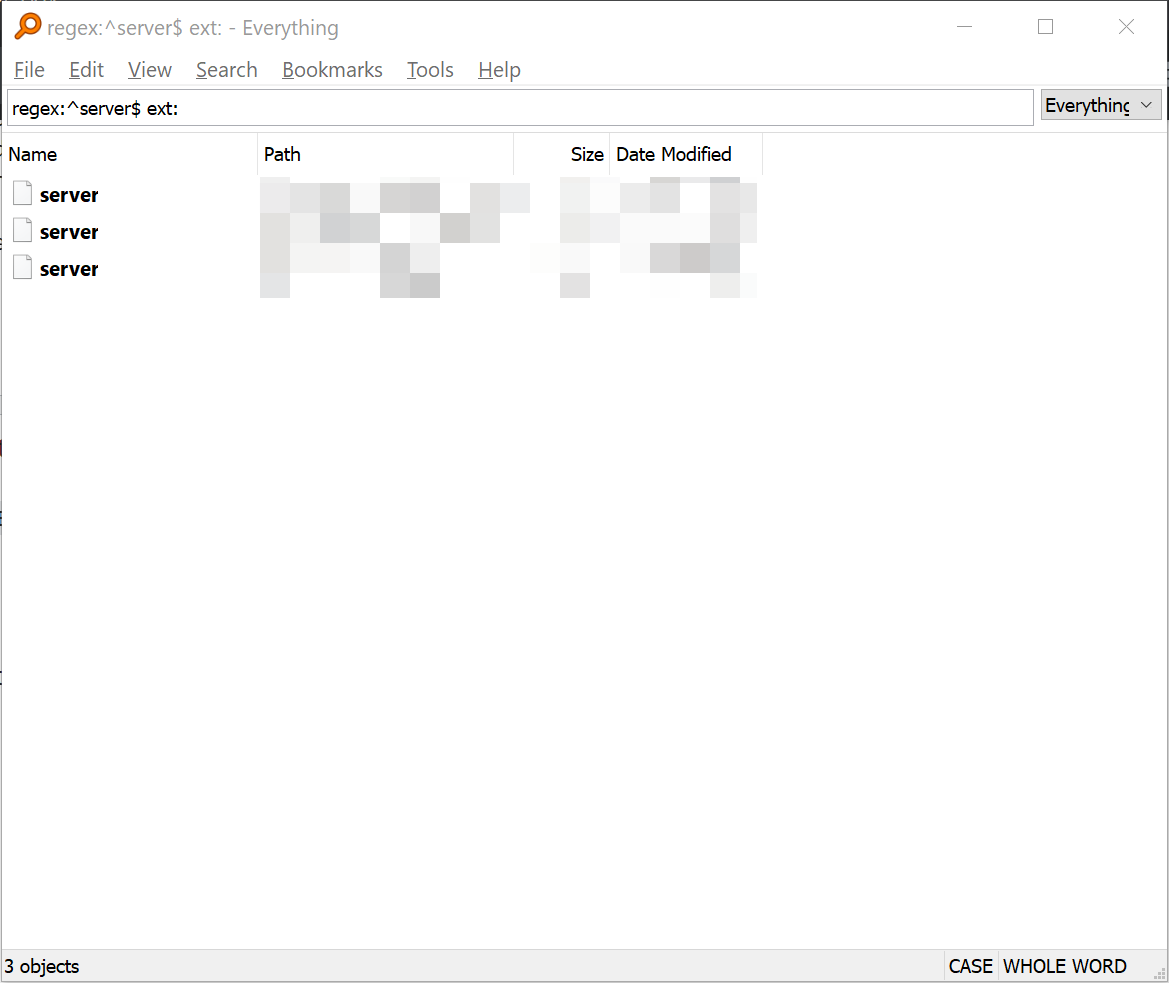 In my machine, the reason causes the connection problem is the EMACS_SERVER_FILE pointed file does not the actual used file.

Hopefully, my course of debugging can help you fix it.

Not the answer you're looking for? Browse other questions tagged microsoft-windows emacsclient or ask your own question.