I just ran into a weird issue while tweaking my colour theme for terminal Emacs. The background wasn't appearing as black as expected, but grey, even though the background was set to #000000. So I opened the 'customize-face' dialog, and then opened the 'choose colour' option for background. This presents the following list: 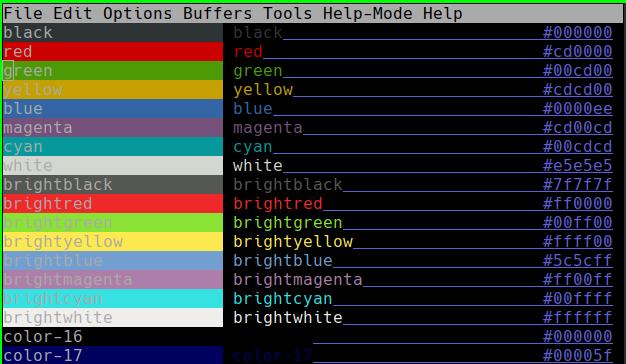 Notice that the first colour, black, is actually grey, despite being listed as #000000. Stranger, is there is a second colour named color-16, with the same code #000000, and it is full black (see the bottom of the image).

This doesn't happen in GUI Emacs, where #000000 is called black, and produces true black. There is no color-16 in my GUI emacs.

This is a bit awkward as I'd like to have the same color theme for GUI and terminal emacs, but black seems to mean different things. Can anyone explain this?

Turns out this was a problem with gnome-terminal. I fixed it by opening the profile preferences from the gnome-terminal menu bar, selecting colours, and changing the built-in scheme to Linux console.

Not the answer you're looking for? Browse other questions tagged terminal-emacs colors or ask your own question.

3
How do I duplicate the 'effective' theme colors resulting from using terminal Emacs with a transparent background?
3
Changing the background of line number column (linum) to the same color of line highlighting background color
3
Emacs colors being set differently when TERM is 'screen-256color' and 'xterm-256color'
1
Terminal: get 16-colors default color scheme in 256color mode
2
Emac in Terminal opens in unusable green background
4
Shifting Emacs Theme from one Computer to Another
4
Conditional True color (24 bit color) support for iTerm2 and Terminal.app in OSX with Fish shell
4
How to detect the term color support inside of a emacsclient session?
0
How to enable 256 colors in terminal