What are the options to play music from within Emacs?

I have a bunch of music (.mp3) files on my disk, and I would like to play them from within Emacs. I tried EMMS, but it seems rather bloated. I'm curious about other possibilities, with comparison of features. In particular, I am interested in these:

Your initial rant suggests that you did not really give EMMS a try... Maybe you should? 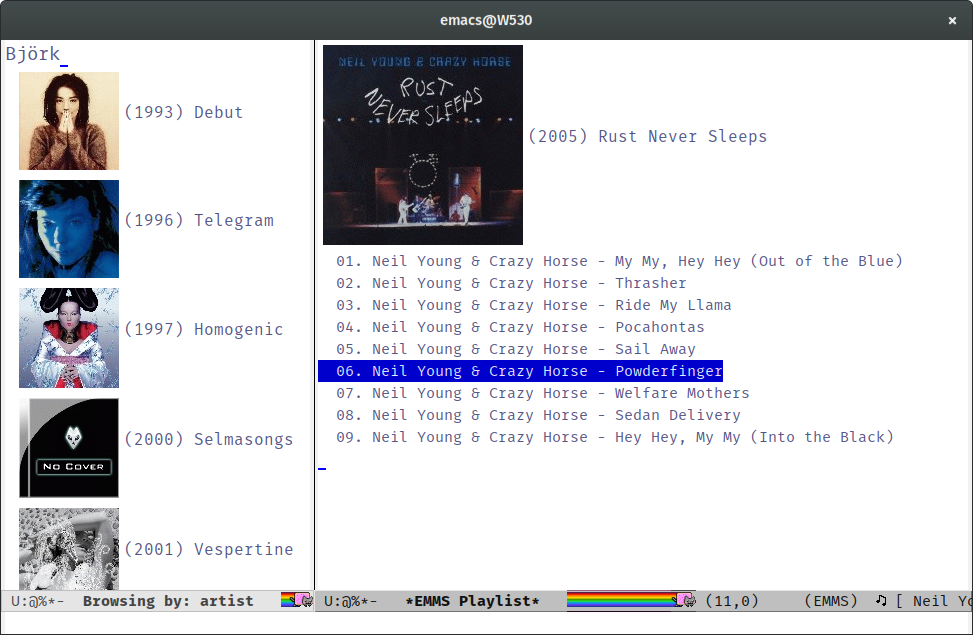 Quick setup of the EMMS-browser

Add something like this to your init.el (after installing EMMS):

Click F7 to see initialization instructions. To add music do M-x emms-add-directory-tree. This will add all music to *EMMS Playlist* (available through F7 F7) and eventually to your library. Feel free to opt out of the library and use the playlist only. Just adjust what F7 calls.

Getting pretty cover art in EMMS is decently simple. First, read the manual (click the "pretty"-link above). The gist is that for each ~/music/artist/album you need the set: cover_small.jpg of 100px × 100px, as used on the left above, and a cover_med.jpg of 200px × 200px, as used on the right above (adjust the sizes to your liking). The no-cover (Selmasongs above) is set via emms-browser-default-covers. beet can fetch covers for you. Then use find and convert (of imagemagick) to resize and rename covers. It's a bit "manual" at the moment. . . I use the following script, which is probably copied or inspired by the interwebs. I'm not proficient with shell so do let me know if you know a better way.

You may be looking for Bongo: http://wikemacs.org/index.php/Media_player#Bongo

My favourite though is mpg123. Very simple and many commands available. I didn't integrate it to Dired but I quickly add files or folders to the playlist thanks to Ido.

Bookmark+. Search for "music" (and "navigation list") on that page.

However, note that currently Emacs itself supports only *.au and *.wav sound files - see the Elisp manual, node Sound Output. Bookmark+ thus recognizes only these files automatically as sound files, and gives them a file-handler property of play-sound-file.

Not the answer you're looking for? Browse other questions tagged bongo emms music-player or ask your own question.