How to move master to branch in magit?

This is how I move master to branchX in git:

Is there a way to do that in Magit?

In this example, I want to move master to wstudent-topic2: 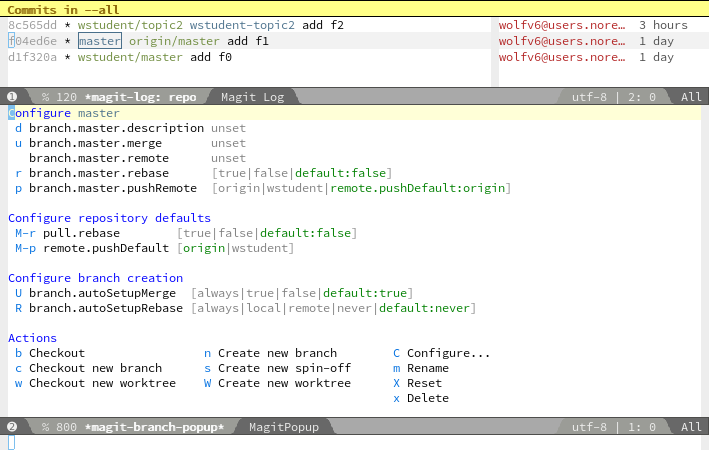 It is not clear what you want to do but since my attempt to get you to explain in more detail what you want (or to get moderators of this site to close the issue because you don't do that) have failed, I am answering some questions that you did not actually ask.

Based on the screenshot (but for the most part ignoring what you have written) I am going to assume that your question is one of:

How do I merge topic2 into master?

If you put the cursor on the add f2 line first, then you could also just m m RET because topic2 would be the default in that case.

How do I reset master so that it points at the same commit as topic2?

In a situation like the one in the screenshot you should just merge topic2 as I have just described. But if the situation looked like this instead:

Then a merge would result in this:

Maybe that's what you want - I have no way of knowing. But if you want this instead:

then move to the [topic2] add fs line and type C-u x RET.

Not the answer you're looking for? Browse other questions tagged magit or ask your own question.

4
How to create a new branch from old commit using magit
5
Magit always use current branch to create new branch
2
How can magit 2.x “git rebase --interactive master” from my branch dev-feature-1?
12
Simple rebase from master with magit?
24
how to move/rename a file within Magit?
19
Magit - How can I checkout a remote branch locally without typing the entire branch name?
3
Magit - How do I sync my feature branch with the latest master without checking out master?
3
Mode-line not updated after checking out new branch using Magit
0
Why magit use rectangle on origin/master and not only on master?
1
What's the difference between magit-branch-checkout and magit-branch-and-checkout?