Emacs ZNC-ERC: How to make Customize save my preferences for all sessions

I am setting up my ERC client to connect to my ZNC IRC proxy server, and I am following this Emacs wiki. At the following step:

I am in the Emacs customize menu where I enter my ZNC server information, but this information is only saved for the current session, and I have to re-enter for every session.

Here is the menu, with a warning at the top indicating that I cannot save my custom settings: 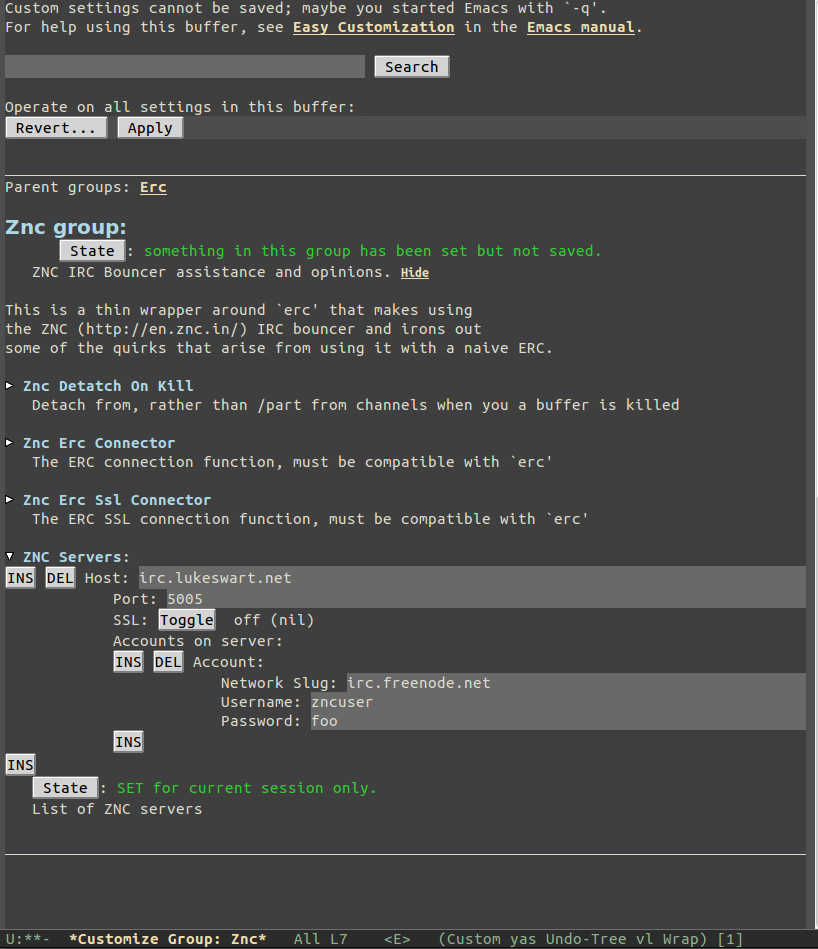 I try to save with C-x C-s, but I get the following message in the mini buffer: Saving settings from "emacs -q" would overwrite existing customizations. This doesn't make sense to me because I am not starting Emacs with a -q flag. I am using the default Emacs desktop file from my Ubuntu installation, which loads my .emac.d/init.el file.

I tried investigating this Emacs wiki page, where it says: Customize stores saved values (for future sessions) in the property saved-value, but I'm not sure how to set this value, or where to begin with setting variables inside the Customize code. Any suggestions?

The only other hint I have is that clicking on State > Show Saved Lisp Expression at the bottom of the page, reveals my values as follows:

Thank you for the tips, it led me to discover the underlying problem and eventually fix it.

The problem was in my Ubuntu desktop file, saved under ~/.local/share/applications/emacs24.desktop. Under this file, Emacs was starting with emacs -q --load ~/path/to/my/init.el. I initially missed this desktop file because I was checking under /usr/share/applications/emacs24.desktop. Anyway, here is the code that Customize adds to my init.el, although this should not be added manually:

If you started Emacs normally, so that it read your init file, then yes, Customize should let you save any changes you make. If it does not, then that sounds like a bug.

If you did not start Emacs using switch q or Q (or equivalent, which means not to read your init file), and if you tried to save Customize settings and Emacs gave you that error message, then that is a bug, I think.

Please use M-x report-emacs-bug, describing just what you did so that the Emacs developers can reproduce the problem.

7
How can I get sessions.el to save my registers?
1
How to sync customize interface with external config file?
1
Wrong file path when saving through "customize" interface
2
how to get persistent ERC sessions?
6
init.el and trampling of custom-set-variables
2
How to properly specify defcustom default list of heterogeneous types?
1
Emacsclient not loading init file changes
1
Make customize save lists newline separated
2
emacs-custom file get overwritten