With semantic-mode enabled and reading a C++ source file in cc-mode, running helm-semantic-or-imenu correctly shows all the classes, variables and functions defined in that file. However, all the descriptions have the characters & and * missing. So, by simply looking at the entries shown in the helm semantic/imenu buffer, I can't tell the correct signatures. For example, a member variable defined as const char* fileName shows up as const char fileName. Is there some variable which would change this display behaviour?

EDIT : More information thanks to @TuDo - Both semantic-ia-show-summary and helm-semantic-or-imenu use semantic-format-tag-summarize to parse the tag info. However, the latter correctly outputs const char* fileName.

In a buffer with only the line const char* fileName as above, running (semantic-fetch-tags) returns this tag that gives back char as type:

The type is "char", although it has the attribute :pointer 1 to denote the level of pointer. helm-semantic does not account for this attribute, so I will try to update it and create a PR for Helm to fix this.

EDIT: But then, the Helm function uses semantic-format-tag-summarize to format tag for displaying in Helm, so this is a bug in Semantic itself for not returning correct original appearance of tag. I will report this to CEDET maintainer.

EDIT2: As a workaround until this got fixed. you can at least press TAB to temporary jump to function signature and view the correct one.

EDIT3: I finally reproduced the error with a minimal example:

Eval the above code in a file with a pointer. For some reason, when the buffer string is returned, characters like * or & is deleted. Maybe it should be escaped when ``semantic-format-tag-summarize` returns tag string? I already reported this issue to CEDET maintainer.

EDIT4: This bug was fixed with commit 9ea601e. The problem is solved.

I've just patched moo-jump-local to properly handle const char* fileName. It seems that semantic can't currently parse top-level references. Although it parses them in the arguments lists, as you can see here: 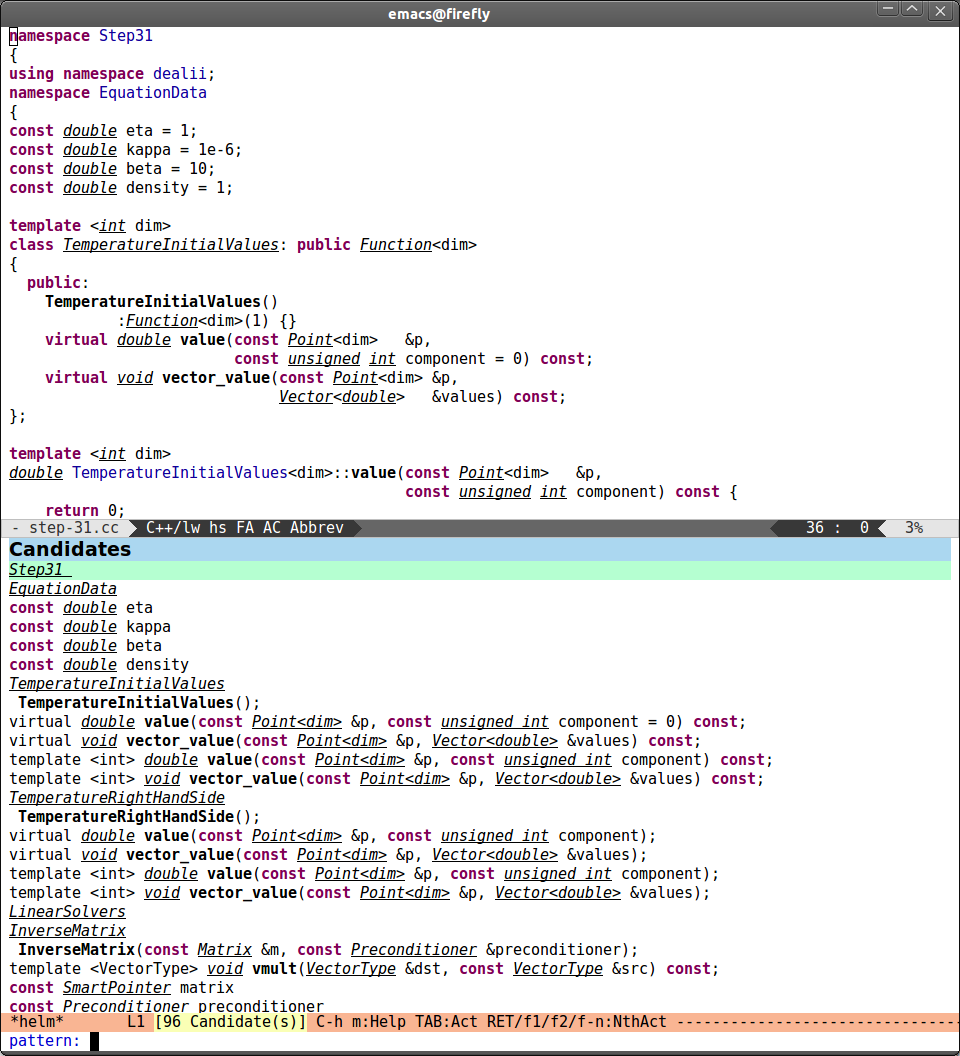 Not the answer you're looking for? Browse other questions tagged c++ semantic-mode imenu or ask your own question.

1
How to diagnose why semantic-imenu does not correctly parse a file?
12
How to get semantic syntax highlighting on emacs for C/C++ code
2
How to make helm-mark-ring/helm-imenu follow current candidate
1
imenu doesn't work on indented C++ code
1
Can Semantic and Company coexist?
0
CEDET semantic-complete-jump customization
1
Why is my Imenu not showing function and class definitions?