On Emacs, if I type C-h, b a list of keybinds come up, including: 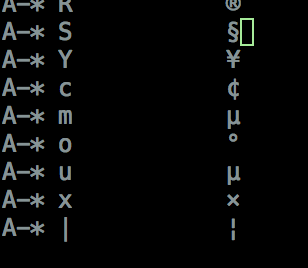 what is A- and how do I access it?

A- is the Alt modifier. Which, for clarity, is almost definitely not the key labelled 'Alt' on your keyboard -- that's recognised as the Meta modifier.

Most people simply don't have this modifier key. It's relatively common for people to configure Super and Hyper modifiers on modern keyboards but, probably on account of the potential for confusion, one doesn't tend to hear about people using the Alt modifier in Emacs these days. (It was useful on keyboards which had an 'Alt' key and a 'Meta' key, though.)

If you have a need, you can invoke the Alt modifier like so:

Followed by whichever key you wish to be modified. In your examples: *

1
Capital A Meaning in Emacs Syntax?

6
What is the concept behind the default keyboard shortcuts?
0
How to limit keybinds to normal mode and not to override keybinds in minibuffer?
2
Default key binding is lost, how to restore it?
5
What bindings start with H-z?
4
What keystrokes brings up the prompt to issue Lisp commands?
2
Define a customizable (defcustom) key binding
2
How do I create a fully customized keymap, so that I can use that instead of the default global one?
2
What mode does the command `query-replace' activate?
0
Spacemacs - What does C-c do (what things are inside this menu)?
2
What does the `@` mean in key-shortcuts?