The traditional way of opening a file is via C-x C-f (find-file). I don't know since when this has been the case, but in Emacs 27.0.50 (Linux), using the menu bar's File -> Open File invokes the GTK file selection dialog. 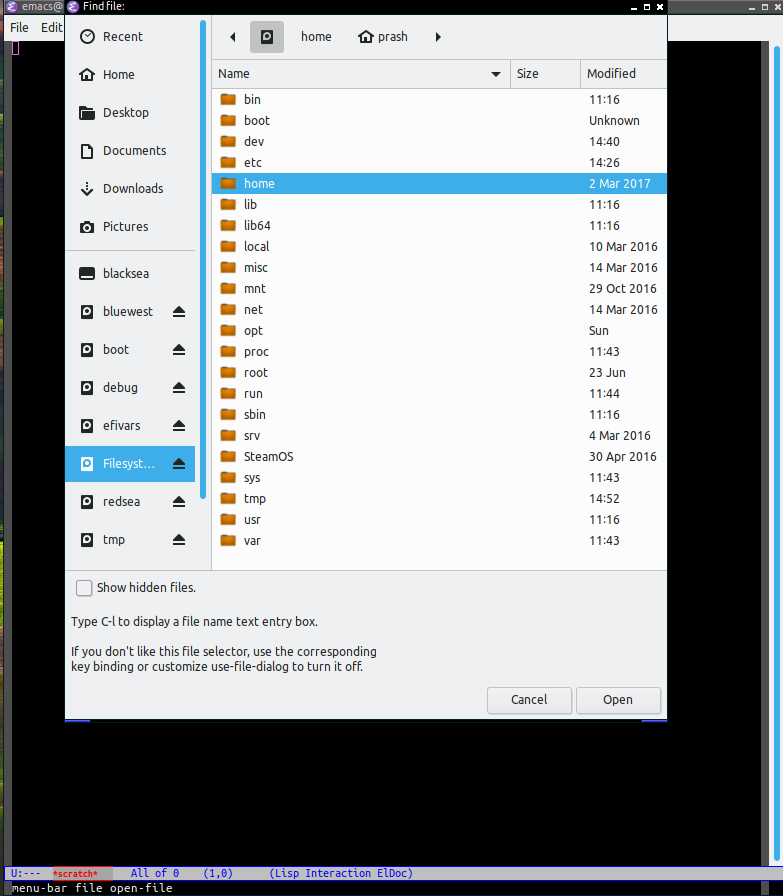 Since I prefer this behaviour, I'd like to know:

find-file uses the minibuffer or the GTK+ dialog depending on what next-read-file-uses-dialog-p returns. So you can force the dialog by overriding this function:

You ask about initiation of the selection by M-x. I don't know whether there is a simple way to cause use of the dialog box even when you do not use a menu or tool-bar button (typically initiated with a mouse). (But it's also not clear to me what M-x has to do with selecting a file, unless you mean M-x find-file or some such.)

Anyway, the reason the file selection box is shown is likely because of the settings of options use-file-dialog and use-dialog-box, which you can customize.

In addition, since you have GTK, you can customize options x-gtk-show-hidden-files and x-gtk-file-dialog-help-text, which affect the behavior of the file selection box.

use-file-dialog is a variable defined in C source code. Its value is t

Non-nil means mouse commands use a file dialog to ask for files.

This applies to commands from menus and tool bar buttons even when they are initiated from the keyboard. If use-dialog-box is nil, that disables the use of a file dialog, regardless of the value of this variable.

This variable was introduced, or its default value was changed, in version 22.1 of Emacs.

To your second question: You can test whether Emacs is running in a window system (GUI) or in terminal mode, using predicate display-graphic-p. C-h f tells us:

Return non-nil if DISPLAY is a graphic display.

Graphical displays are those which are capable of displaying several frames and several different fonts at once. This is true for displays that use a window system such as X, and false for text-only terminals. DISPLAY can be a display name, a frame, or nil (meaning the selected frame’s display).

Not the answer you're looking for? Browse other questions tagged find-file menus gui gtk3 or ask your own question.

1
Emacs hang after installing GTK3 in windows 7
1
Why does opening a file take so long in python mode?
0
do not move window when "left mouse click on empty part of menubar"
1
Key assignments in init file issue
1
right click for menu with choices (to change font size)?
0
How to pass the result of yank to find-file?