Set a title to an Emacs instance running in a terminal

On Ubuntu, I usually open more than one Emacs instances in the same time (for frontend and back development). These instances always by default take the name "Terminal" as a title as shown on this screenshot: 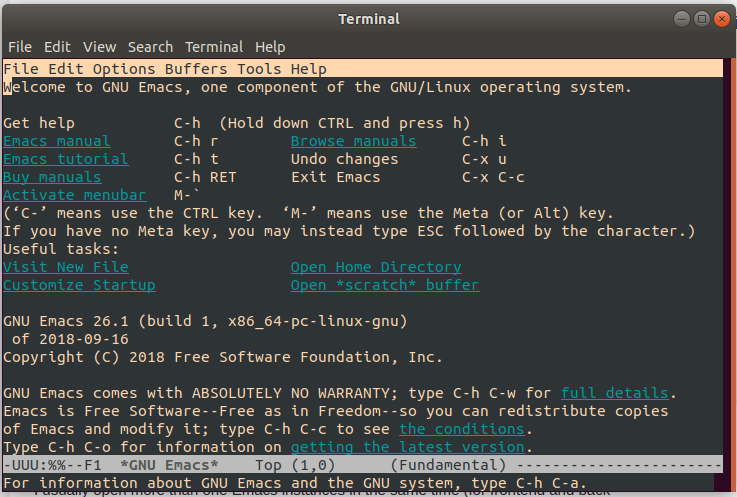 Is there a handy way to change that title?

Emacs is running inside a Gnome terminal.

Emacs automatically sets its operating system window title (i.e. the title of the Emacs frame) to emacs@darkstar (where darkstar is the host name of the machine it's runnning on) if there's a single Emacs window, and to the buffer name if there are multiple windows. (That's multiple windows in the same instance.) However, this only applies to the title of Emacs windows, i.e. when running a GUI instance of Emacs. If you run Emacs inside a terminal, Emacs doesn't set the terminal's title out of the box.

The Emacs wiki gives a solution when Emacs is running in an xterm-like terminal. Most Unix terminal emulators, including Gnome Terminal, are xterm-like. Install the packages xterm-frobs.el and xterm-title.el (not available from a package repository that I can find) and put the following code in your init file:

Then when Emacs is running in a terminal, it will try to set the terminal emulator's title.

To configure the text that goes into the title, configure the variable frame-title-format. For example, to always show Emacs: buffer name regardless of whether there are multiple frames, use

If you want to give a specific title to a specific window, use the command set-frame-name.

xterm-title doesn't work on Emacs 28, and has been removed from MELPA due to being unmaintained and served over insecure HTTP.

I created a simple replacement:

Not the answer you're looking for? Browse other questions tagged frames terminal-emacs linux or ask your own question.

1
How to make frame-title-format persistent?

8
How to prevent emacsclient starting a new frame every time?
5
how to set environment variables={EDITOR, VISUAL} to prefer running emacs?
3
How do I duplicate the 'effective' theme colors resulting from using terminal Emacs with a transparent background?
1
Colors illegible after upgrading OS
4
Arabic in Terminal mode
4
Almost working smoothly attempt to get terminal Emacs to copy to clipboard