How can I start learning Emacs Lisp?

I'm mostly a vi user and am converting to Emacs.

Past the basics and now use it for writing code in C and some Python with plans to do an R conversion too.

I wrote (Common) LISP for years over two decades ago when I was in grad school but now I've severely lapsed (can write hello world but that's it).

Are there books, blogs, resources I should read, exercises I should do?

In my experience, the included tutorial on Emacs Lisp was not too helpful (I tried twice over the years and failed). Instead, I finally used the included Emacs Lisp Reference.

What finally did work:

Realize that there are two aspects to Emacs Lisp: The basic language itself, and the interaction with Emacs. Separate these two in your mind. Focus first on the former (should not be too hard as you learned Lisp in the past). Use sites like Excercism to practice.

Once you have a grip on the basics (loops, functions, variables, conditionals, etc), move on to the aspects that involve Emacs itself (changing text, switching buffers, etc). This is vast, and you'll likely get lost in a sea of details. There are a few things you should understand really well, as you'll use them often. They are:

Once you understand these, instead of spending all your time reading the ELisp reference, think of simple problems you have with Emacs that you want to write and try solving them with Elisp. You'll likely need help on some of the steps, and that's where Google can help you.

Examples of problems I solved to practice my Elisp:

Finally, make sure you know the following keybindings:

What a great question! Here is the path I've taken:

Read the Emacs Tutorial before anything else. It sounds like you've done this. Good on ya! However, for anyone coming to this at a later time, this is the place to start your Emacs journey. There are a lot of misleading blog posts out there. They over complicate things. Emacs makes it easy:

You can also access it via Ctrl + h t, or C-h t in Emacs notation.

The tutorial introduces the basic concepts of Emacs, clarifies historical terminology, and gets you going in under 30 minutes. It also sets the stage for the next step. 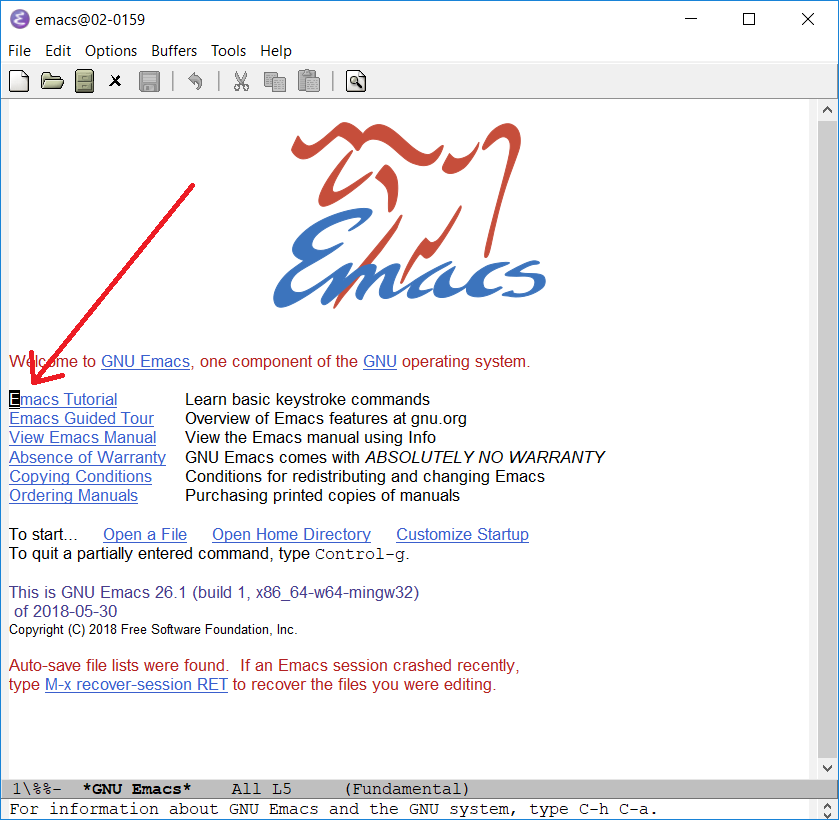 Step 1: Read "An Introduction to Programming in Emacs Lisp"

The next step is to read An Introduction to Programming in Emacs Lisp. I cannot recommend this book enough; it's so well written! It comes with most Emacs installs1. Simply press C-h i and select it from the menu. You could also go to it directly via C-h i m Emacs Lisp Intro.

This text is written as an elementary introduction for people who are not programmers.

It should say "for people who are not Lisp programmers." Lisp is a little different from other languages, so it's worth reading if you're unfamiliar with Lisp. The author has an approachable style and walks through many examples. It took me about a week to work through.

As of late 2015, John is the maintainer of the Emacs project. Sacha Chua does a great interview with him here in which John goes over the basics of Emacs Lisp, the development environment, and provides lots of great advice.

2a. Read the source code

Because Emacs is "the extensible, customizable, self-documenting, real-time display editor", all the source code is included. Learn to use the help features, C-h f for a function and C-h v for a variable. There is always a link to the source code: 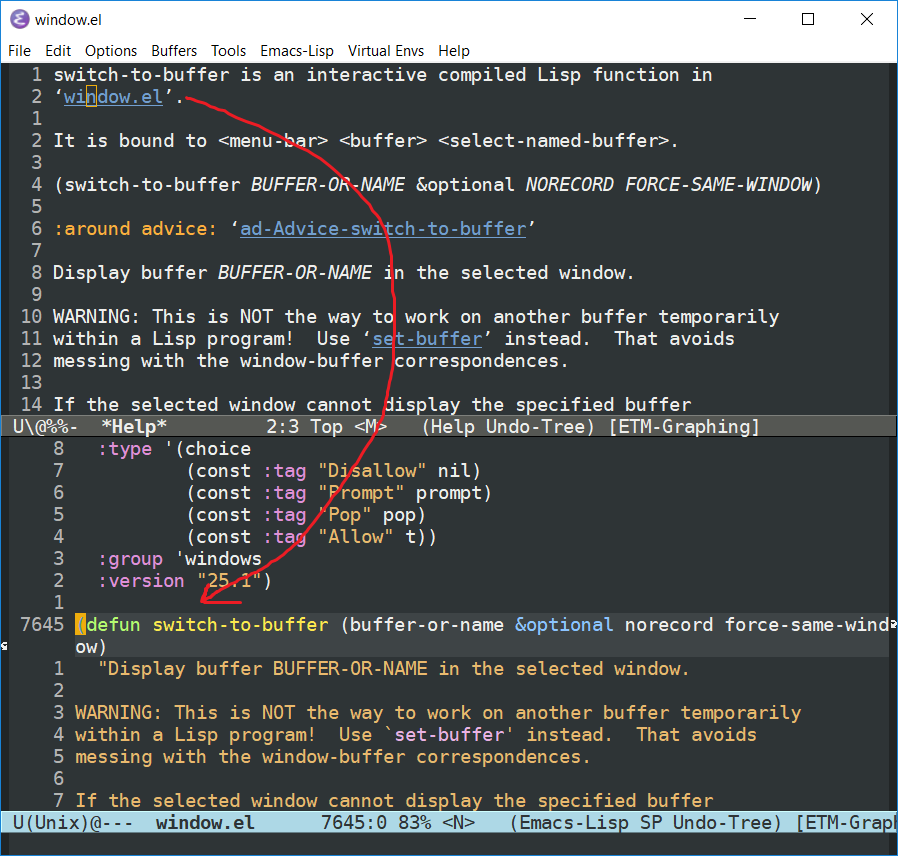 A lot of people track their init.el files in Git or Mercurial. Seek them out. One trick is to click on people's profile on StackOverflow, especially emacs.stackexchange.com:

They often have links to their GitHub or personal website:

Repos called dotemacs or dotfiles are quite common. Over time you'll get a sense of what good code looks like and what bad code looks like. You'll also learn the big names, like those of Xah, Sasha Chua, binchen, Magnar Sveen, abo-abo, and many more. There are so many people to learn from!

Also here is a list for some good Emacs configs.

Challenge yourself to write the functionality you want. Never copy code blindly; always take the time to understand it. If you don't understand it, don't use it! When you take the time to understand a piece of code, aside from learning something new, you often think of ways to improve it for your particular use case. This is an opportunity to hack! After all, that's what your init.el is for! Make mistakes, break things, learn to debug. You'll find that because Emacs is written in Elisp, development is a delight.

I've found that the Emacs community on StackExchange loves a good Elisp question. So, hack with confidence that other people will appreciate your efforts to learn.

Nothing clarifies your understanding like trying to explain something. Trolling the main page, you'll also find answers to questions you never knew you had.

Over time you'll find yourself able to generate solutions faster and to answer other people's questions. Like all programming, it can be frustrating. However, remember to judge yourself today against yourself yesterday. Some people have been hacking on Emacs for, literally, 30 years! Most of the time, though, you'll find that Emacs is a pleasure to work with and the freedom it gives you is inspiring.

PS: Check out the package evil.

1 Some installs don't come with it. Debian users, for instance, must install it separately. It's kind of silly, but it's stored in the non-free repos. Add a non-free repo to /etc/apt/sources.list by appending non-free to the end of each entry:

I recommend the "Emacs Lisp Intro".

The "Emacs Lisp Intro" might be already available in info format within your Emacs. Try C-h i m Emacs Lisp Intro RET or evaluate (info "(eintr) Top") in Emacs.

If this fails search the web for "Emacs Lisp Intro".

As a refresher on Lisp I highly recommend the first three chapters of Peter Norvigs Paradigms of Artificial Intelligence Programming. Those give you a great and fast pace (re)introduction to Lisp which will get you back on track quickly.

For total noobs there is COMMON LISP: A Gentle Introduction to Symbolic Computation which teaches you the same concepts but at much lower pace.

Both books are available online, for free.

After going through one of the above, you can read all Elisp tagged posts on nullprogram.com and go through the reading guide at masteringemacs.org. I also publish tutorials at my own blog with-emacs.com. To learn about common pitfalls reading the top questions here will be of help. For specific problems search either this site, rosettacode or you favorite search engine.

After you are familiar with the basics the Info manuals will usually answer most remaining questions that come up when hacking on Emacs.

The Elisp track on exercism.io is also a fun way to improve your skills. The exercises are more focused on elisp than on Emacs but will cover a good range of basics like regular expressions, data structures, math, etc.

Since you have a background in Common Lisp and you're "past the basics", there is no point getting lost in the "Introduction to Programming in Emacs Lisp".

What you can do right away (I don't have a background in CL and it worked for me) is:

1) find a mode that you use and try to add functions, you'll find help in the Emacs Lisp Reference

2) write your own custom file with your own simple functions, here again use the Emacs Lisp Reference

I really don't think you need to read something specific on emacs lisp. It's no secret that if you want to do something in Emacs, chances are, you just have to find the right command or someone has written the code already and it now resides somewhere on a wiki page, or github, or was made into a plugin. Just by copy-pasting that code and reading it, you will have learned a fair share of Emacs lisp by the time you are even somewhat satisfied with your .emacs.

If you want to get some ideas on how to customize Emacs, custom configurations by other people might be a good source of wisdom. A selected list of such configurations you can find here. Though, really, having your own vision works better and visiting other people's .emacs is usually warranted only when you want some questions answered [e.g. how do I structure my code/packages?] or some code copied for some specific goal of yours.

Browsing MELPA got me to install and try maybe a dozen of packages.

If you are going to develop a plugin, I found that reading the code of some particular plugin of your liking can get you started fairly quickly.

Since you use vi, check out evil-mode, it has worked great for me. I would also recommend helm with helm-apropos (or just apropos if you don't want helm) command to make your journey easier.

So, my advice is to get to the customization point right away and you will learn everything you need on the go. Especially that you hacked lisp before, long ago or not, and because learning elisp is, as far as I can tell, a means to an end for you, which is to customize emacs.

Seems to me that Loren Ipsum's answer covers it rather well.

I would simply add that I'm assuming you know the basics of Lisp. That would help you, but it is not necessary (I'll get back on that.)

One way to learn is to simply hack or modify an existing mode/extension. I learned it back in 93 by hacking at the Ada language mode file. It was one of the most fun experiences I had back in college.

So you could do that with a language of your choosing, say, a Java mode, or a Lisp mode, or even an Elisp mode file.

Change it, add macros, etc. That's how I did it.

Not the answer you're looking for? Browse other questions tagged help learning or ask your own question.

12
How can I practice searching and replacing with regular expressions interactively in Emacs?
9
How do I pronounce Emacs?
5
Are there any games to kickstart learning emacs like VIM Adventures?
1
Where to explore Emacs-Lisp APIs?
2
How go to Emacs lisp source function from my custom elisp file?
2
Find variable definition and uses in emacs-lisp files?
1
Temporarily show the documentation for a emacs lisp function
1
emacs lisp manual
3
How does scoping work in emacs lisp