I have the following in my init.el:

The above does the job, but Emacs uses some other fonts when displaying headlines in org files or words enclosed in ‘’ quotes in Emacs info (C-h i). I would like to have a way to set up those fonts myself as well. Is there a way? 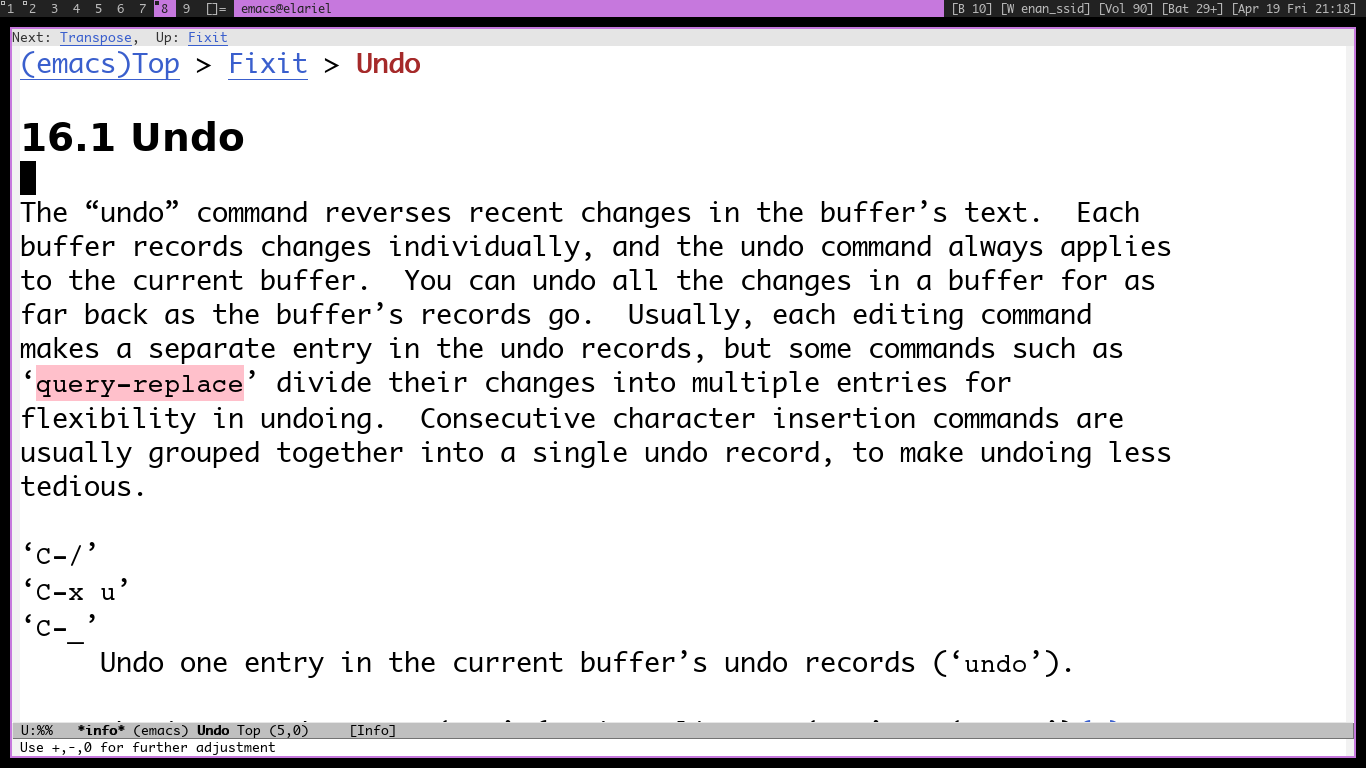 Emacs uses/defines/handles fonts in ways that you might not be used to. Fonts are treated as attributes of Faces (Emacs Manual: Faces). A Face has several attributes (Emacs Manual: Face Attributes), colors, over/under line, strike-through, size, generic font specification, specific font specification, etc. For your purposes I think you want the :font attribute. In fact, this is what you're doing (under the hood) when you specify a font in default-frame-alist; you're setting the :font attribute of the default face, default-face.

To see a list of all (currently defined) faces do: Meta-x list-faces-display RET. You'll get a list of face names on the left, and abcdefghijklmnopqrstuvwxyz ABCDEFGHIJKLMNOPQRSTUVWXYZ styled according to the face on the right. Clicking on the face name will bring you to the customize facility where you can view or edit the face to your whims.

I recommend against doing that for every. Single. Face. You'll go mad. Instead, if you find a stray face that you don't like, use the key-chord that @Drew recommended (C-u C-x =) to find the face name and its current font. You can then use M-x customize-face RET "face name" to customize that face.

If I was in your current situation though I'd do the following.

In macOS I use Aquamacs. Boiling down the font stuff in my init file I have:

Of the 350 or so faces defined in my current session, almost all are Menlo derived.

Note, I worked through the following with emacs 26.1 built from source with GTK3 and fontconfig support on Ubuntu 18.04

You list two specific points in your example. The first, the pink-highlighted-quoted text. If you C-u C-x =, you'll see this text is in the Info-quoted face. Drilling into the Info-quoted face, you'll see it inherits from fixed-pitch-serif. In turn, you'll find that fixed-pitch-serif is defined as using the Monospace Serif family. This generic font family (a la "monospace", "sans serif" and "serif") is an Emacs-ism. This defined in a a customizable variable face-font-family-alternatives in faces.el. Manipulating this variable to redefine Monospace Serif to include your choice of Monaco gave me no results. Setting fixed-pitch-serif to use the :family of Monaco worked perfectly fine.

The second example (from your comment) was the header. Doing C-u C-x = again we get info-title-1. From here we get info-title-2 -> info-title-3 -> info-title-4 -> variable-pitch. The face variable-pitch is defined in as the font family "Sans Serif". This is a fontconfig generic font family that your system should set. (Locally, I have "Sans Serif" set to "DejaVu Sans".) This should be set to your liking in your DE so that you have a consistent look across your DE. If you want to change it in Emacs, set the face variable-pitch. (I don't recommend setting it to a monospace font, like Monaco, but it's your Emacs.)

These faces, fixed-pitch-serif and variable-pitch are not defined in terms of the default face, but can be set like any other face, via the customize facility (M-x customize-face RET <facename>) or directly. There are two functions you can use to set faces directly. The first is set-face-attribute. You could put the following in your init file.

Note that the documentation of set-face-attribute states that it is intended for internal use.

Additionally, I still recommend using set-frame-font to set your default font. Setting its third argument to t will set the font for all subsequent frames, in addition to the initial frame.

See it's documentation via C-h f set-frame-font RET for more details. Putting it all together you could do the followng:

To get something more to your liking. In fact I have that in a trial ~/.emacs and it's working fine, even with emacsclient -c.

No. There is no magic command, or setting, that will allow you to change all of the fonts in Emacs at once. As pointed out by @drew and @amitp in their comments, you'll need to set faces that don't derive from the default face yourself. In order to set as many as possible, you need to do the following:

0
Why does Emacs display with big fonts?
4
How to set Chinese fonts in modern Emacs
11
Emacs doesn't display color fonts at all
2
Set different fonts for different charsets
0
Wrong font suddenly
1
set default fonts for Aquamacs in .emacs
1
Why can't Emacs get a font that it can list among the fonts?
3
Use all eight weights of IBM Plex fonts in emacs (including "Text")