Why after search-toggle-case-fold text is select?

I want to set I-search case sensitive mode. Before:

But why it select text? 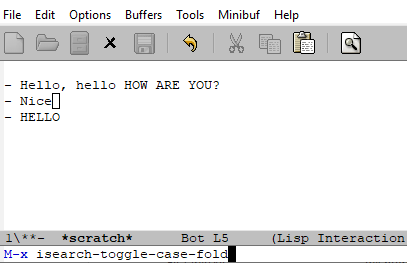 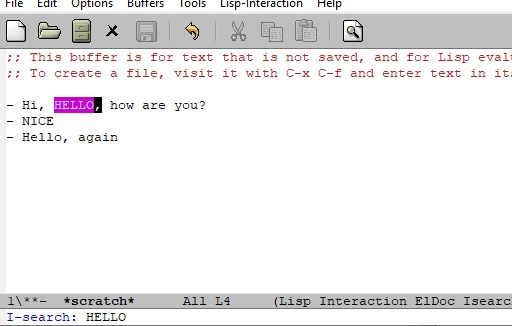 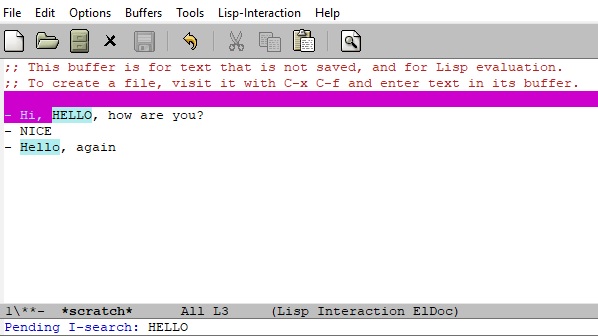 Note, that I assume that isearch-toggle-case-fold is not supposed to be run outside of isearch-mode.

Cause of the effect: The highlighting belongs to the overlay stored in variable isearch-overlay generated or moved by function isearch-highlight.

The reason why isearch-update is used in isearch-define-mode-toggle is pretty clear. The change of the case sensitivity should have immediate effect.

But that only makes sense when we are in isearch-mode.

A conceptual fix would be:

But, maybe isearch-toggle-case-fold should actually throw an error when called outside of isearch-mode.

Not the answer you're looking for? Browse other questions tagged isearch case-folding or ask your own question.

5
How to do case sensitive searches using evil's evil-search?
2
How can i keep the case when I am using select and paste to C-s input field?
0
case-fold-search apparently not taking effect in re-search-forward
2
How go to prev search text in minibuffer?
1
In minibuffer forward through search history M-p not work
1
How show and filter search text interactively in separate buffer?
0
Why text yanked into the Isearch search string is always in lower case?
0
I-search - case sensitive
0
How do I search/replace with case sensitive search?