I follow this tutorial. The code after selecting the region and <Tab> or equivalently C-M-\ in an org file:

I would have expected an indent before "herbivores". 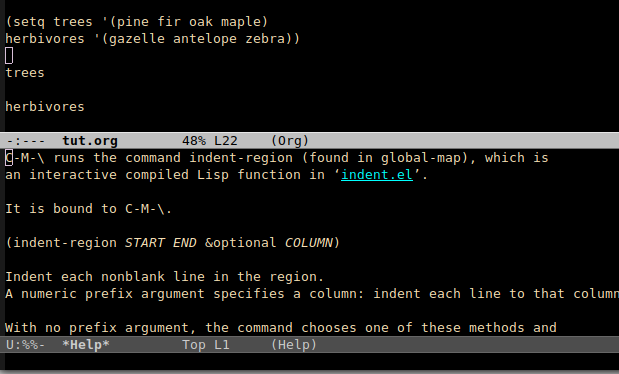 indent-region indents the region according to the current mode.

In a Lisp mode (e.g. emacs-lisp-mode), selecting that as the region and using TAB indents it as you say you expect, not as you show.

Why would expect it to behave similarly in Org mode?

(The section of the tutorial that you cite doesn't say anything about indentation, BTW.)

It is bound to C-M-\, menu-bar edit region indent-region`.

Indent each nonblank line in the region.

A numeric prefix argument specifies a column: indent each line to that column.

With no prefix argument, the command chooses one of these methods and indents all the lines with it:

Called from a program, START and END specify the region to indent. If the third argument COLUMN is an integer, it specifies the column to indent to; if it is nil, use one of the three methods above.

Not the answer you're looking for? Browse other questions tagged indentation or ask your own question.

10
Make web-mode always indent with spaces
1
TAB does not auto-indent lines anymore
1
Indent region in python script
1
What's the name of the auto indent code?
4
How to turn off alignment-indent after line continuation in Shell-script mode?
5
Docstrings don't automatically indent themselves in elpy-mode. How do I fix this?
0
Smart Tab : indenting with C-u <tab> does not work (beginning of a line)
1
Indent forwards a tree structure