I'm struggling to get line length correctly setup under Elpy.

I found How to customize the line character length in elpy? and have in the past found flycheck cannot find module for pylint.

My configuration looks like (I've tried both autopep8 and yapf)...

I have as per the suggestions in autopep8 · PyPI created ~/.config/pycodestyle which contains...

...and yet on saving a file it doesn't apply the 120 character rule in so much as lines that are > 120 characters are not auto-formatted and still reports in *Messages*...

...which I'm unsure whether it will be interfering with things.

Any ideas or suggestions on how to configure autopep8 to automatically split lines at 120 characters would be very gratefully received as I feel like I've been going round in circles, despite seemingly trying the suggested solutions (I admit I may have misunderstood how to do this though or just cocked things up!).

In light of answer from Chin-Ben I checked elpy-config I get...

...and have duly updated jedi/autopep8/yapf/black all of which are from the RPC env, but in doing so I noticed that pip was outdated as it reported...

There are many versions of pip installed on my system in various places, one in ~/.local/bin/pip along with many other commands (all dated from 2018, possibly from where I did a pip install --user before I understood virtual environments correctly).

Removing ~/.local/bin/pip didn't resolve this so its something else out of the many being picked up out of...

Its not the system that is being picked up as that is up-to-date, the elpy-rpc-venvone is up-to-date too, but the ~/.config/emacs/elpy/rpc-venv/bin/pip reports an error which is informative...

...and I've been having trouble with Jedi complaining about the EPC Server configuration...

...which the suggested course of action (M-x jedi:install-server) did not resolve. What stands out though is that...

...indicates that something has gone awry when I moved from keeping my config under ~/.emacs.d to ~/.config/emacs/ a while back.

Suffice to say it looks like my virtual environments/EPC server are not working as intended, but this has been really useful in helping to identify this as I was baffled as to why I couldn't fix things.

According to Elpy README, flymake-mode is used for syntax check. Not flycheck.

If you prefer flycheck, please turn off flymake-mode and make sure the virtual environment created by elpy is activated.

Steps to set up Elpy, 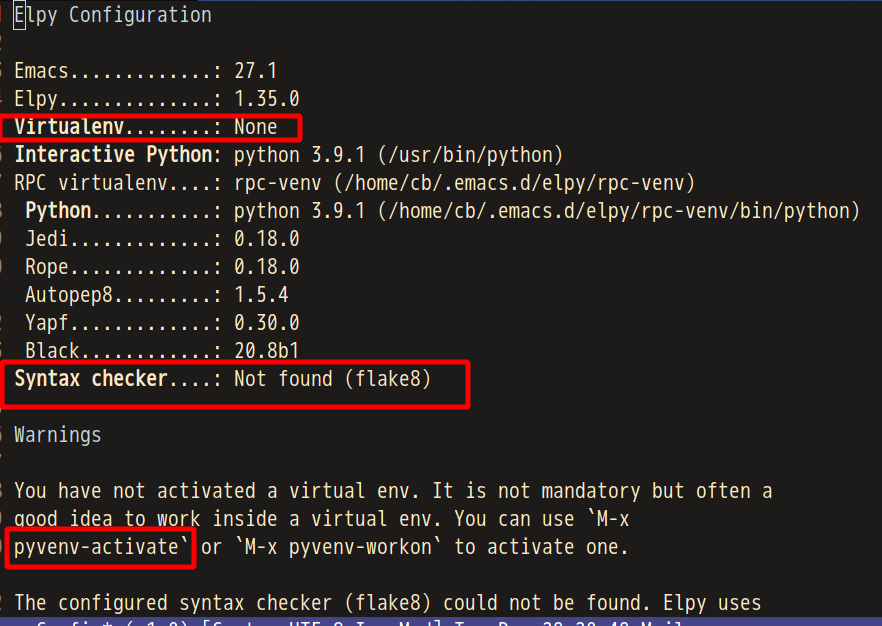 If you want to set up flake8, see https://flake8.pycqa.org/en/latest/user/configuration.html ,

Flake8 supports storing its configuration in the following places:

You can run source ~/.emacs.d/elpy/rpc-venv/bin/activate && flake8 --help && deactivate to list all flake8 options.

Extra tip, It's wise to backup all the required python packages in virtual environment,

You can restore the packages,

Below is my setting in setup.cfg.

Not the answer you're looking for? Browse other questions tagged elpy or ask your own question.

5
How to customize the line character length in elpy?
5
flycheck cannot find module for pylint

5
How to customize the line character length in elpy?
0
Problem to install/setup elpy
0
How to disable multiple elpy keybindings?