Manually close a (compilation) window that was most recently opened by running e.g. 'grep'

I'm trying to find a way to quickly close the window that I just created by running 'grep' (i.e. a kind of compilation window).

I'd like the solution to be independent of my current window layout and also of which window that's currently in focus. This so I can always use the same keyboard shortcut.

I thought I could find an Emacs command to switch to the most recently created window, i.e. the one just created by 'grep'. Then I could just use that command followed by 'q' to close the 'grep' window. However, I haven't been able to find such a command.

Unfortunately the 'other-window' command (C-x o) doesn't work as well as I'd like in the following configuration. Here the Emacs frame is split into two windows (C-x 3) with the cursor in the right window (W2). I.e. it initially looks like this:

Then, after the grep command, it looks like this, with focus still on 'w2':

The annoyance is now that 'C-x o' switches to 'W1' rather than 'grep'.

Note: I could create a shortcut that closes the 'grep' window/buffer, but it'd be nice if the solution here works also for other compilation-like windows.

If the Emacs frame isn't as tall, e.g. on a laptop, this window setup:

results in 'W1' being replaced by 'grep' instead of a 'grep' window being added. I.e. it results in this:

In this case, as some of the answers suggest deleting the 'grep' window, the resulting window setup ends up being this:

So it turns out I don't necessarily/always want to delete the window containing the 'grep' buffer.

If you want to target whichever compilation (or similar) buffer is currently being used by next-error and previous-error, I would suggest this:

Or based on the modified requirements:

n.b. In either case you may need to (require 'subr-x) for the use of when-let.

The Elisp below defines a command my-delete-compilation-window that deletes the first compilation window in the window list. That should normally be the last selected compilation window. The command is bound to C-c w but you can modify that to your own liking.

Add the following to your init file:

Then whenever your window configuration is unexpectedly changed, or you simply want to go back to an earlier configuration, use C-c<left> to call winner-undo (which you can do repeatedly if necessary).

Obviously if additional window config changes have happened since the window in question was created (if you had navigated through the grep results, for instance), then this solution might be less practical; although note that you can use repeat to ease the process: C-c<left>C-xzzz...

C-c<right> returns you to the most recent configuration (immediately, rather than step-by-step).

Not necessarily a single key press, but this can help, I think: by default, C-x 0 in minor mode Icicle is bound to command icicle-delete-window. You can use a prefix arg to pick which window(s) to delete.

C-x 0 runs the command icicle-delete-window (found in icicle-mode-map), which is an interactive compiled Lisp function in icicles-cmd1.el.

delete-window or prompt for buffer and delete all its windows.

When called from the minibuffer, remove the *Completions* window.

With prefix C-M- instead of C-, the same keys (C-M-mouse-2, C-M-return, C-M-down, and so on) provide help about candidates.

Use mouse-2, RET, or S-RET to finally choose a candidate, or C-g to quit.

By default, Icicle mode remaps all key sequences that are normally bound to delete-window to icicle-delete-window. If you do not want this remapping, then customize option icicle-top-level-key-bindings.

Easiest way IMO which is usable across windows of all types is simply to use the excellent ace windows extension:

Here's what I see when I "ace delete" with three windows open. It is clever when you have 2.. obviously, delete the other one. 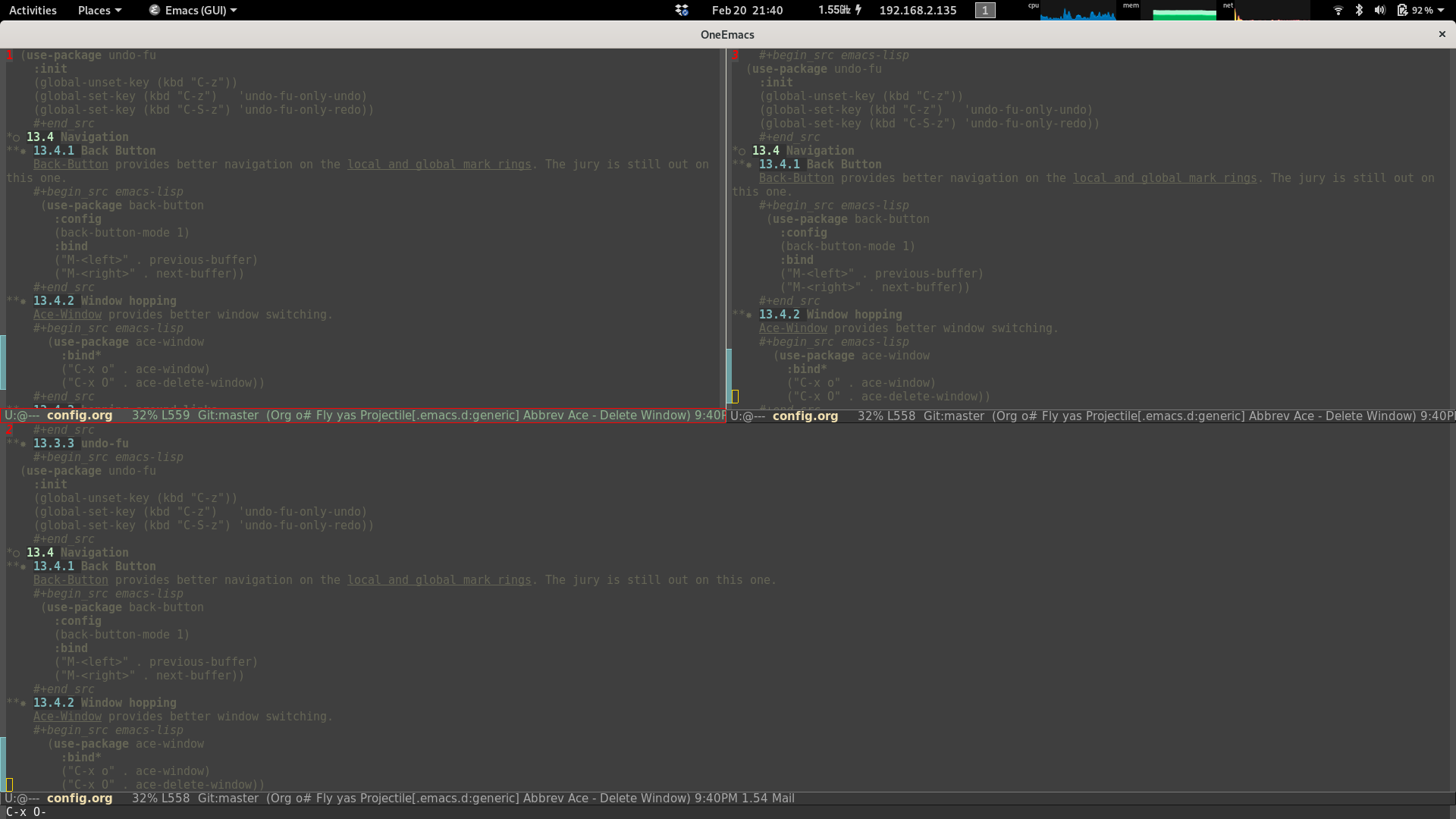 Not the answer you're looking for? Browse other questions tagged window or ask your own question.

16
How can I block a frame from being split?
5
Define a main window and then close all others
15
Quick way to close all but one window, and then revert to previous window setup?
8
Automatically switch focus to new window
3
Attempt to delete minibuffer or sole ordinary window
0
Killing a window without killing the associated buffer
3
How to close help buffer without moving to it?
0
Switch to the most recently selected buffer in the current window