How to get emacs to keep cursor in the middle of buffer during search?

While searching (isearch-forward) in a buffer it often happens that I need to see some lines before/after the matched string. It happens regularly (as shown in the screenshot below) that the matched string appears at the bottom of the buffer. In that case I was searching for [h!] and there is not even one line showing below the matched line. 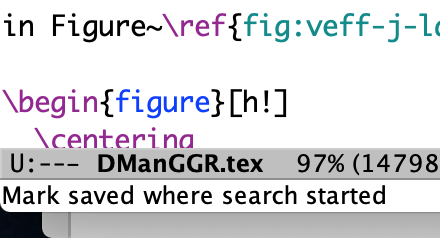 Is there a variable I can set to get the desired behaviour?

You can just use C-l at any time during Isearch, to center the current search hit vertically in the window.

Not the answer you're looking for? Browse other questions tagged isearch scrolling or ask your own question.

24
Let Emacs move the cursor off-screen
6
How to preserve the visual height of the cursor after an operation?
2
How can I configure incremental search to put my cursor at the start of whitespace rather than the end?
10
How to search an Arabic word in text without its diacritics/accents?
5
How to center the current line vertically during Isearch
5
How to get `window-end` when the window scrolls?
2
isearch but don't move the cursor until I ask to search
1
How show and filter search text interactively in separate buffer?
0
How to enable linum-mode only during I-search?