Is it possible to force `markdown-mode` during git commit?

I was using following answer: https://emacs.stackexchange.com/a/57535/18414 to set markdown on the .git/COMMIT_EDITMSG file.

My .gitconfig file, to open commit message with emacs:

Now during the commit (due to some squash operations in git), I see the commit messag along with the opened magit-diff: window. 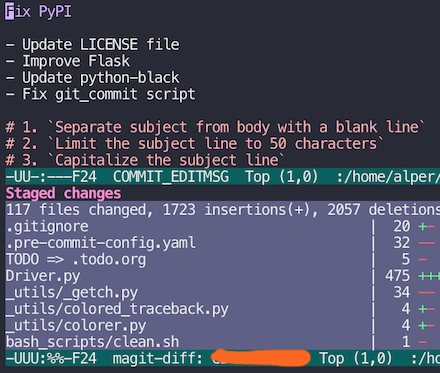 When I check the major-mode it became Local in buffer COMMIT_EDITMSG; global value is fundamental-mode.

Afterwards, when I added into COMMIT_EDITMSG file and do C-s C-x, commit fails and I get following message:

fatal: could not read commit message: No such file or directory

But instead if I re-enable markdown-mode, save and exit there would be no error.

[Q] Is it possible to force markdown-mode during git commit?

You're using a package which is very opinionated about how things with Git should work, so don't be surprised if related Emacs configuration which works without Magit gets clobbered when you do use Magit.

In this instance, Magit uses git-commit.el which provides the variable git-commit-major-mode for controlling this.

If you want to control how things happen in Magit, you want to be checking the Magit documentation firstly.

Not the answer you're looking for? Browse other questions tagged magit git markdown-mode or ask your own question.

2
How do I associate a file such as git's `COMMIT_EDITMSG` with a specific mode?