What I would want is a function or a package that could display all opened projectile projects with ivy or helm and let me choose a candidate. When the candidate would be selected, the last buffer opened in that project would be opened. It would be basically a counsel-switch-buffer but with projects. If possible the last visited project would display first.

An example of this would be this package: persp-projectile, but unfortunately it does not work for me most of the times.

What I currently use is centaur-tabs and it has the function centaur-tabs-counsel-switch-group with centaur-tabs-group-by-projectile-project which is the closest thing of what I want. It only misses to place the last project on top of the candidates. But the real problem is that I don't even use the tab functionality and it makes Emacs have some small bugs sometimes (eg. hiding helm candidates on emacsclient).

So if there was a simple custom function with ivy and projectile I would really appreciate it.

projectile-switch-open-project does almost what I want but it triggers find-file. I would want it to just go to the last opened buffer on the project.

What I would want is a function or a package that could display all opened projectile projects with ivy or helm and let me choose a candidate. When the candidate would be selected, the last buffer opened in that project would be opened. It would be basically a counsel-switch-buffer but with projects. If possible the last visited project would display first.

Emacs has had rudimentary project support built-in since v25 via project.el, but it's recently seen a lot of interest and new features in v28, including project switching. The good news is you don't have to wait until v28 is released to avail of them; you can install project.el on Emacs 26 or later from GNU ELPA: http://elpa.gnu.org/packages/project.html.

Its project-switching interface revolves around the command project-switch-project (bound to C-xpp by default). Quoth its entry in the Emacs manual at (info "(emacs) Switching Projects"):

This command first prompts for a project with most-recently-used-first completion. Here it is in action with Ivy: 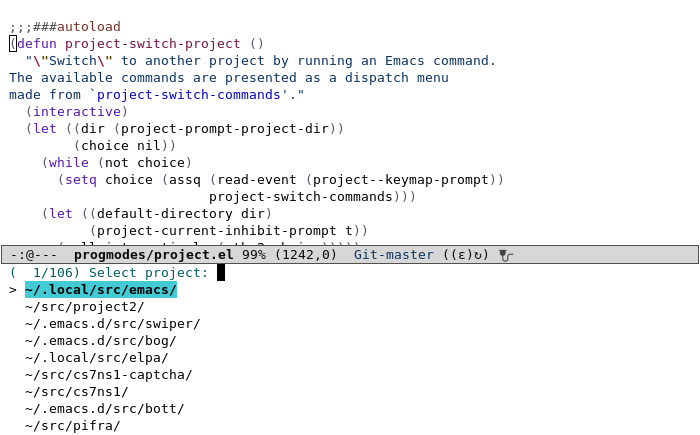 [As usual, you can of course customise this display using either built-in or Ivy-specific options.]

After selecting a project, the command dispatches on project-related commands found in the variable project-switch-commands. Here's the default set: 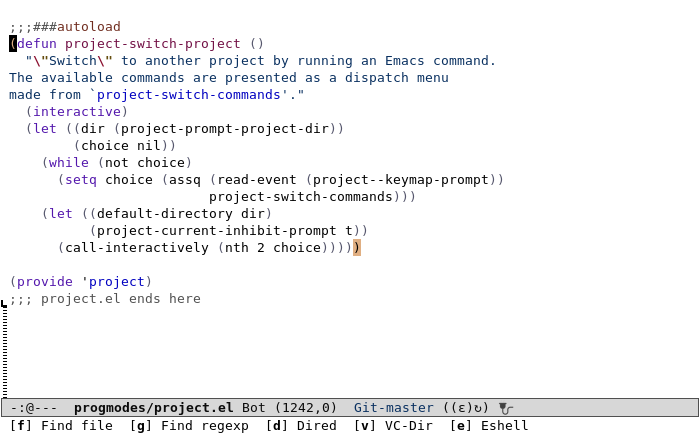 The prompt is now: 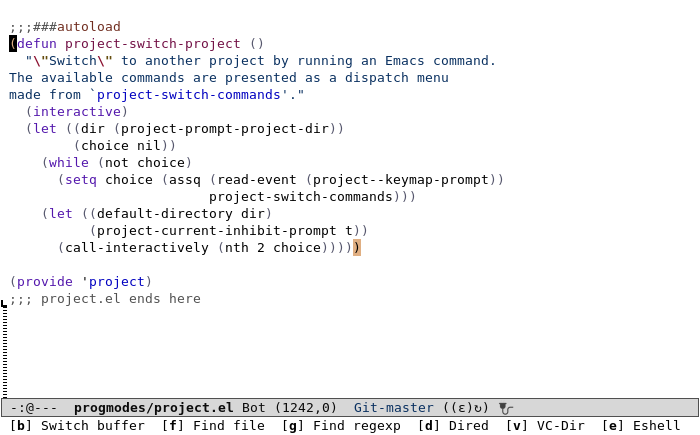 Finally, project-switch-to-buffer prompts for a buffer in the selected project. Here it is in action with Ivy: 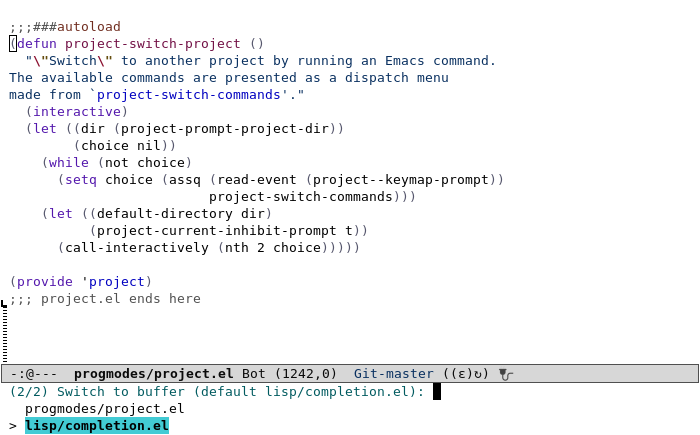 As @Swedgin said in comments projectile-switch-open-project will work without doing nothing more.

Given that you want to switch to an open project buffer, you should also customize projectile-switch-project-action accordingly with your needs, in this case I'd say it's either:

Also you can modify counsel-projectile to read open projects lists.

projectile-open-projects and projectile-relevant-open-projects returns the list of currently open projects, so ultimately it's a matter of using them as ivy-read candidates list.

At first look I'd say that changing

Will do the core of it, but cannot test it right now, neither giving it the finishing touches to make it play well without losing the original behavior.

I - or someone else - will extend the response later.

Not the answer you're looking for? Browse other questions tagged projectile ivy counsel project workgroups or ask your own question.

4
Projectile project in folder without write access?
5
Can I make the projectile chosen project sticky and not follow the current buffer
0
How can I map helm-projectile-grep to helm-projectile-ag?
2
Projectile: show project open buffers when switching project
0
projectile-find-file and ivy - create file with subdirectories
1
How to create a function that have the functionality of helm-projectile-switch-to-buffer but with added opened org files?
1
Searching a specific project sub-directory with projectile
1
Can I make projectile open a default file when I switch to a project?