Patching together emacs buffers and shells outside of emacs

I'd like to use emacs as a replacement for my current IDE when using R. I like to divide my workspace into three panes:

Previously, I had used tmux to achieve this by patching together these three parts (i.e., three shells running emacs as my editor, an R console, and zsh itself). Nevertheless, I discovered in an earlier question that it makes more sense for my R console to be running within emacs so that the editor and console can interact easily (via ESS-mode). For simplicity in structuring these three panes, I could run zsh within emacs, too, but I personally don't like shell-mode and prefer to use a regular zsh outside of emacs. (Apologies if this is sacrilege around these parts.)

Q: Is there a way that I can structure these three panels, as shown below, where the dashed line indicates buffers within emacs? 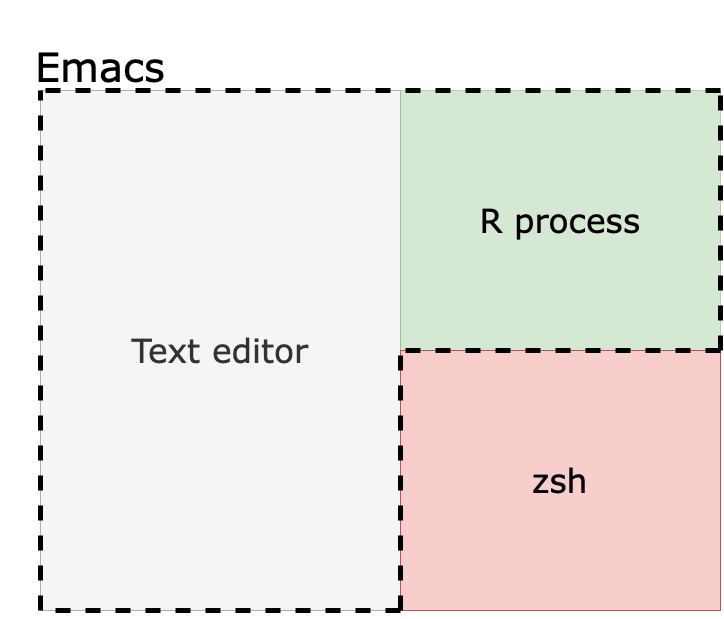 Browse other questions tagged ess window-splitting or ask your own question.

6
Permanent window with list of opened buffers
4
Split window buffers
0
How to prevent some new buffers from splitting the window?
1
How fast swap between buffers?
6
Switch between horizontal and vertical splitting?
4
How to display *help* buffers below one specific window?
3
Split Emacs Screen Three Ways
0
Why set-window-dedicated-p doesn't work with certain buffers?