Help with regex in re-builder : lines without "|" nor ";" at the beginning

I am starting regex with Emacs and cannot get the right regex. I would like to match the line 1 and 4 in the image below, where variable-pitch is "active" and do not match 2 and 3 where is "inactive"

so I am basically trying to say :

line with 'variable-pitch' not containing with ";" or "|" 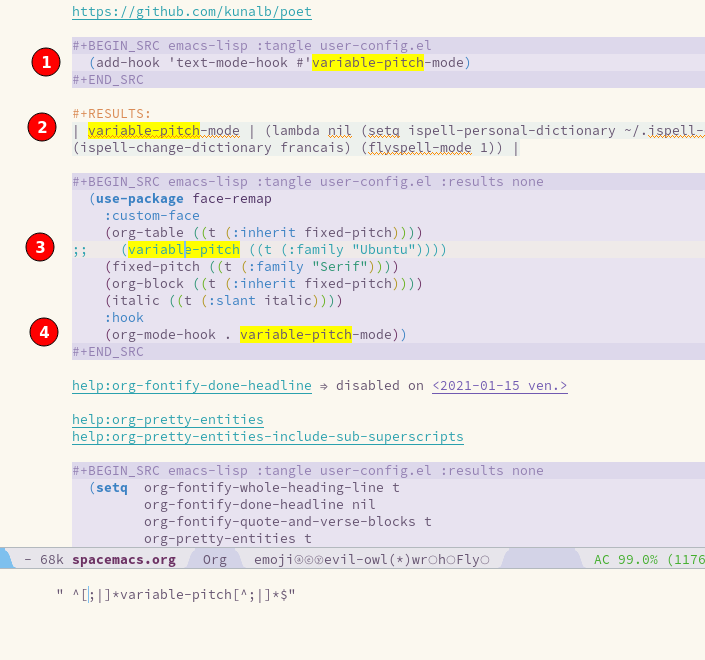 Following this post, I switched re-builder to string mode.

I switched re-builder to string mode

Did you? You've used \\(...\\) to (apparently successfully) match a sub-group, which indicates you're using read syntax. In string syntax that would be \(...\).

Following that you match .*, which is zero or more non-newline characters.

Finally you match a subgroup consisting of variable-pitch followed by zero or more non-newline characters.

so I am basically trying to say: line with 'variable-pitch' not containing with ";" or "|"

Not the answer you're looking for? Browse other questions tagged regular-expressions or ask your own question.

5
Replace a two-line string not ending in digit with a one line string
5
Matching multiline comments in regex
2
Programmatically replace all instances of regex with capture groups and sub-matches in buffer
2
Syntax table to match arbitrary forms with regexp
1
How to paste a multiline regex from re-builder into `replace-regexp`
1
How to understand paragraph-start variable regex
1
Interactively pass argument and use regex in find replace
0
Regex to handle unicode strings in evil mode
0
Is this syntax parse possible with Emacs' regex expressions?