How can I find out in which keymap a key is bound?

I have rebound a the 'd' key in gnus-article-mode, but its old behavior is still active when the point is on an attachment. I can see that the rebinding did not take effect there by doing C-h k d, but it is not telling me what keymap is in effect at that point, so that I can rebind it.

Is there a way to find it out?

Here is a precise example: I'm using evil, and I want articles to be in motion mode. For my keyboard layout I have 'd' configured as the key to go up.

To make sure the evil keys are taken into account, I unset gnus key in the local map:

Unfortunately, when the point is on an attachment, the 'd' key no longer goes up but it offers me to delete the attachment. I guess another binding is active at that point, hence the question.

Solution I used the keymaps-at-point below to find the keymap used was from a text property. I then looked at the code of the bound function to find the name of the keymap gnus-mime-button-map. The following code does what I want:

As mentioned by @YoungFrog in the comments, starting with Emacs 25.1, the good-old C-h k method of describing key-binds will also tell you which keymap the key was found in.

There’s some code here on this, but it’s incomplete as it does not cover everything. Below is an improved version of it.

Keys can be bound in 9(!) ways. Thanks to @Drew for this link (also supplemented by this) with the full list. By order of precedence, they are:

There's a also a semi-item 10. Whatever command was found through the above procedure might also have been remaped.

The following function queries some of these possibilities (the most likely ones), and returns or prints the result.

There are built-in functions for each of these except the first, so we must create one (also an improved version of the code linked above).

Since you’re saying the behaviour is active when point is on an attachment, there’s a good chance this keybind takes place on an overlay or text-property.

If that doesn't work, try the following command as well. Just place the cursor on the attachment, and do M-x keymaps-at-point.

This approach is useful for searching sub-keymap which included into higher level keymap, for example output from:

If you modify filtering condition to include keymapp - you will be able to search ever for prefixes:

So rst-mode-map will be found on both:

I'm aware that the following does not answer the question of How can I find out which keymap, however it deals with the underlying issue in this case of how to ensure that the d key behaves according to what the user wants. If preferred, I can remove this answer and convert into another question + answer regarding that issue.

As a method to override the text-property/overlay map, you should be able to use:

As per Controlling Active Maps, overriding-local-map takes precedence over every other active map other than overriding-terminal-local-map.

emacs-buttons provides buttons-display, which with a prefix argument displaysa recursive visualization of all current bindings.

(Disclaimer: I am the author of the package) 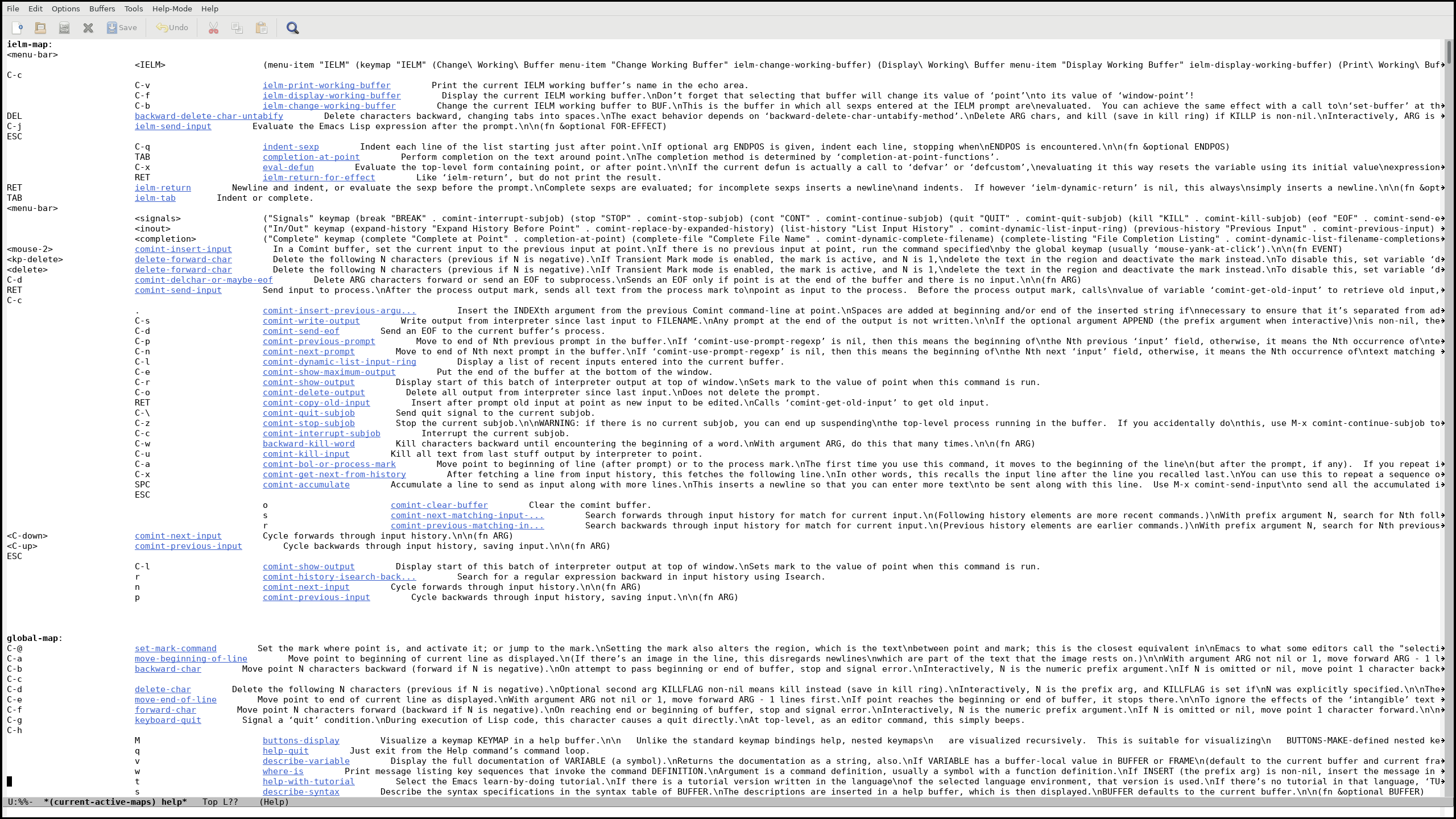 7
The C-x C-j binding for dired-jump stopped working
9
Simulating mouse operations with keyboard
5
Detect when a key is rebound to another command
5
Why does C-c C-x look like an empty keymap?
3
How to use describe-key in Helm results buffer?
3
html-mode and custom backspace keybinding
3
Binding <ESC> <ESC> to have <ESC> <ESC> <ESC> functionality
1
Remove key binding from `ess-extra-map`
1
evil mode with ggtags
2
Dead keys not working in Emacs-Lisp mode *only*
See more linked questions

7
Idiomatic way of extending keymap for inserting unicode symbols?
2
Remove key binding in magit-status-mode
2
Tab always indent even in evil normal mode?
18
Differences between evil-normal-state-map and evil-motion-state-map
4
Evil and org-mode keybinding 't' conflict
5
How to suppress a minor mode's key binding in only certain major modes?
4
How is the key <backtab> defined; how to obliterate it; and how to create a new one from scratch?
3
How to use font-lock to set other text properties (particularly keymap)?
2
make local map bindings available through a global prefix