Would it be possible apply different font/background color for `<code_sample>` in org mode?

In markdownmode, or while asking questions in stackoverflow, when we do,

The background become changes into gray.

Would it be possible to apply same in orgmode, where it also change background color or change its forecolor?

You can add support to highlight fenced code blocks exactly like in Markdown mode, as several comments have already suggested. However, if you're using orgmode already, you have far more powerful and flexible features already built in.

By default, the text in the src block has syntax highlighting applied according the code language of the block, in this case it's elisp: 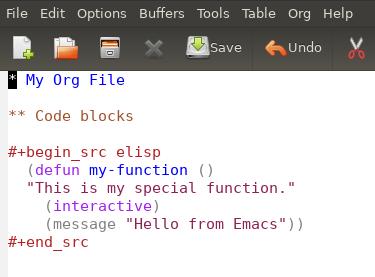 You can modify the way this appears with themes, or by directly modifying the faces (org-block being one of the basic ones).

Similarly, inline code snippets in org mode are marked up as:

The default colouring for this is:

This just scratches the surface. Org-mode provides a lot of features for working with inline code, and especially code blocks. If you're writing documents with included code snippets, you should consider using the features org mode already provides.

Not the answer you're looking for? Browse other questions tagged org-mode font-lock colors or ask your own question.