Quarto is a literate programming framework. It allows you to combine in a single file code (in various programming languages) and text (in markdown).*

When a Quarto document is rendered, the output from the code is combined with the text into a single document (e.g. pdf or html).

I have installed Quarto-emacs, which does a great job of rendering and live-previewing quarto files. Among other things, I have also installed Polymode, which associates different code and text blocks with their respective major-modes in a single buffer. Now I can write, code, and preview the results on the fly. Thanks, Emacs! 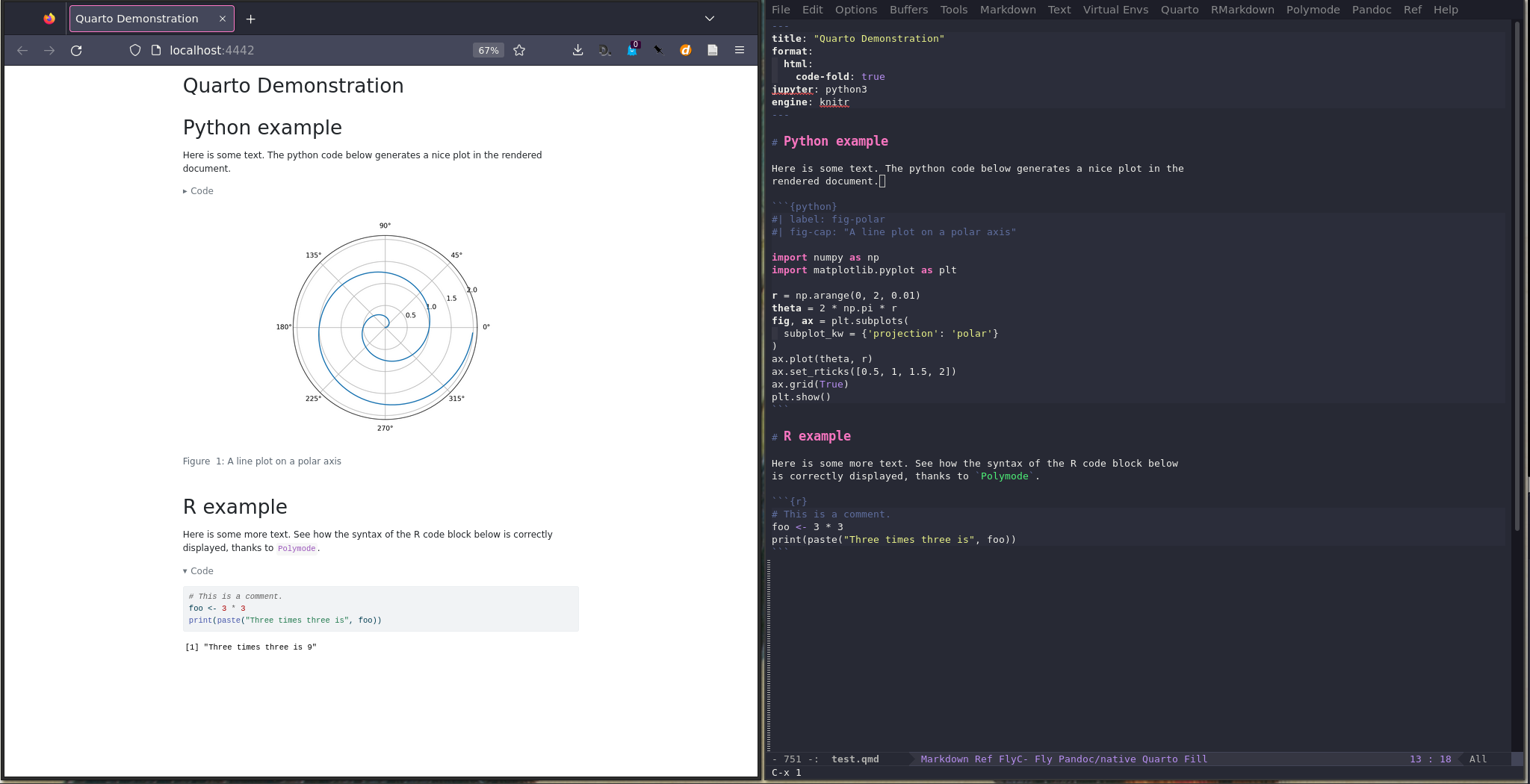 However, whenever I change some python code block, I have to re-render the whole document (by running markdown-preview or markdown-compile). This can take a while. Moreover, I can't run the code block and then continue to experiment in the interpreter (REPL).

So what I want is to run only a selected python code block or the selected and all previous code blocks (like in a Jupyter notebook) in the interpreter (REPL). This works quite well in RStudio, but I would rather stick to Emacs, which in general has great support for Python and R.

It sort of works with R code blocks in Emacs. When I hit C-c b (ess-eval-buffer) on an R code block, a buffer with an R console is opened and the block is executed there. I don't know how to evaluate all previous code blocks, however.

But when I hit C-c c (elpy-shell-send-buffer), the whole buffer is evaluated instead of just the present code block. Of course, this results in a syntax error. When I try C-c C-y w elpy-shell-send-codecell, I get "Not in a codecell".

Is there any way to make this work as seamlessly as in RStudio?

*This is a generalization of R Markdown and similar to both org-mode with org-babel and Juypter notebooks, which Emacs can display and run using ein.

Probably a cleaner way than the original answer is to just define a suitable polymode-eval-region-function. Inspecting again poly-R.el, we find that we can define an appropriate function as follows:

Make sure to evaluate the above code before opening the quarto file, as it configures the polymode-eval-region-function via the python-mode-hook.

Also, make sure that you start a python shell (by placing your cursor within the python cell and doing M-x run-python) before calling polymode-eval-chunk.

Subsequently, you should do M-x polymode-eval-chunk from within a python code block, and then Emacs will correctly make use of the poly-python-eval-region function.

Although I haven't tested this with elpy, I guess it should work when using elpy also. From poly-R.el, we find that the region is narrowed by advising ess-eval-buffer (and similar functions) with pm-execute-narrowed-to-span.

Now, with the cursor placed inside a python code block, we can simply send the block via M-x my-python-shell-send-buffer (or bind it to some shortcut).

Before we can use this, we first have to do M-x run-python from the .qmd file buffer (but I guess you know that already).

Beware that python-shell-send-buffer only prints output (i.e. from print statements), not return values. But, when sending your example code block, the plot should show 'pop-up '.

19
Can I include a common code block in two different code blocks in Org mode?
3
Wrapping Python code with %cpaste and -- to send to iPython in elpy
4
Emacs wrongly indent else expression in Python code
11
Insert code chunk in R Markdown with yasnippet and polymode
1
Elpy - Close Window when invoking elpy-shell-kill
1
Split code across multiple SRC blocks?