I am working with python code, and I would like to be able to evaluate it in an emacs buffer, rather than using another terminal window. I am working with the python-mode from python.el, bundled with emacs.

This works just fine with emacs 24.3 on two different computers (windows and linux). However, I cannot get it to work on a 4rd computer with emacs 24.4: after spawning the buffer, it only shows completion candidates for an empty string (even though I didn't ask for any completion), and if I send a string, be it from a python-mode buffer or directly in the comint buffer, it just shows this list of completions again, and not the result of the command.

What's even more troubling is that according to google results, I am the only one with this issue, yet it is out-of-the-box experience!

Here are some screenshots with emacs -Q:

Bottom of the output: 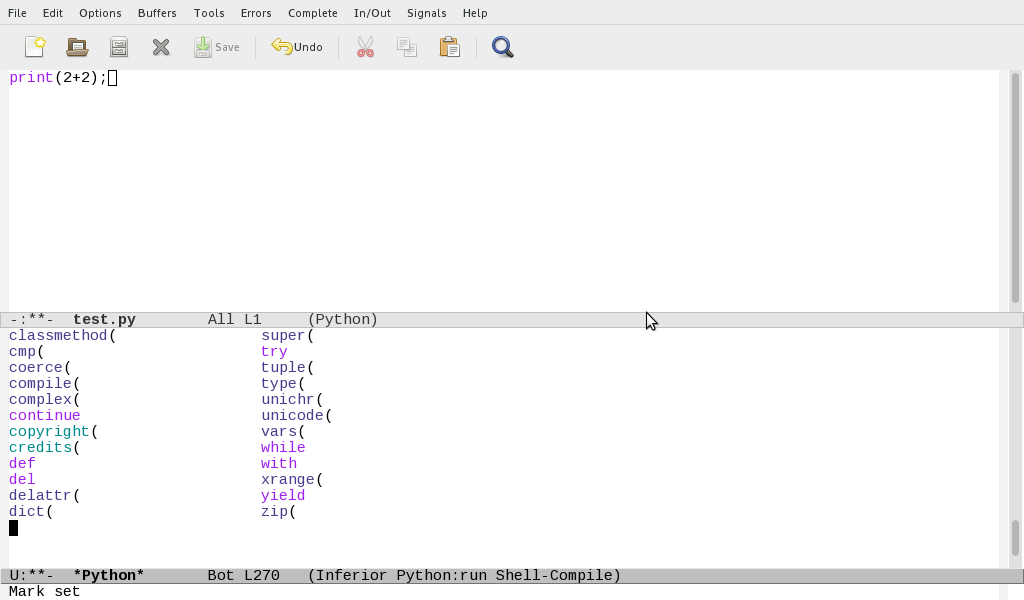 Top of the output: 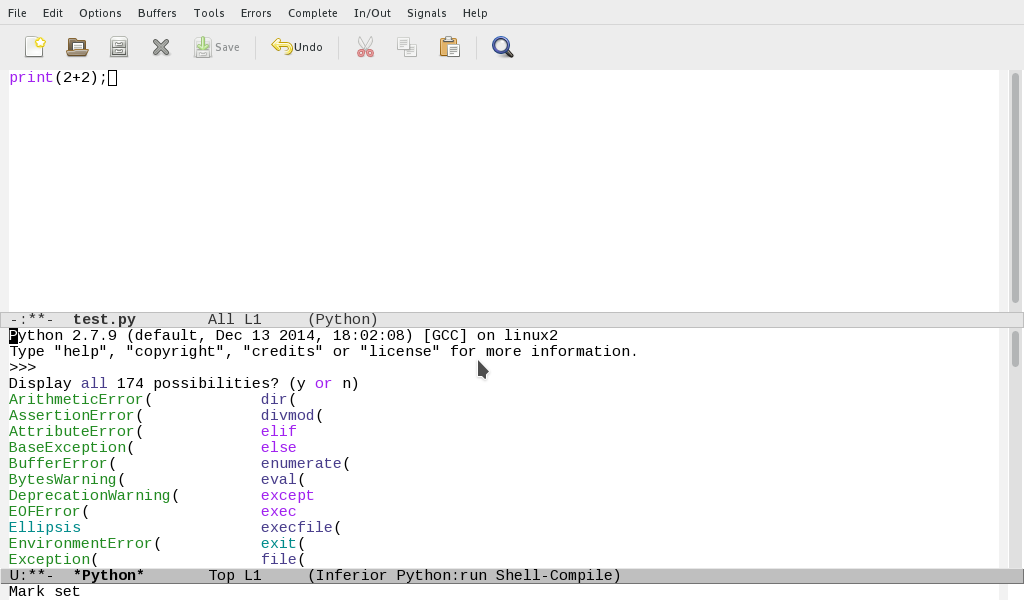 Edit 2 Thanks to a comment by Ista, I tried with a new user, and the problem didn't appear! I have tried restoring various settings to default (notably desktop-wide shortcuts), but without success for now.

Edit 3 I also tried with the ipython interpreter, the result is the same.

Edit 4 I tried starting python from eshell, shell and term (line-mode), it has the same problem: when I enter 2+2; and press RET, I see a list of completions instead of 4. term with char-mode works fine.

Overall, it looks like emacs sends a <TAB> to the inferior process whenever it tries to interact with it.

Not an answer but posting here because it is too long for a comment.

That sounds very strange. Is there anything odd in your messages buffer after you start python? Here is what I see:

and here are the contents of the mentioned variables:

Perhaps you can spot a difference between my settings and yours that might be causing the issue (these are the settings I have when starting with emacs -Q). You may also try running the code defined in python-shell-completion-setup-code, python-ffap-setup-code and python-eldoc-setup-code in python to see if they do something unexpected. Maybe you redefined one of the python functions called by them?

Investigating all my local settings finally gave the answer.

I had in my .inputrc (settings for readline, which is used by the interactive python interpreter) the line :

I have no idea what it was supposed to do, but at least commenting it out fixed it.

Not the answer you're looking for? Browse other questions tagged python comint or ask your own question.

1
How can I change the behavior for python-shell-send-buffer?
1
Switch to python shell without confirmation
0
Select the python version in a terminal
3
No native completion with python3 in Emacs 25.2
5
Python in org babel will not work
1
Using xonsh as python shell
0
Showing full (unabbreviated) Python output in Org Mode