To switch between tasks on an unaltered MacOS Mojave (OS X 10.14.6), one uses command-tab, which is convenient when done with the thumb finger. Now, in order to turn on the meta key inside Terminal (to allow e.g. skipping words with the cursor inside bash backward and forward emacs-style), I can tick the 'use Option as Meta key' in Terminal.app preferences.

This setup leaves me with option as meta key inside emacs, which is not ergonomic, as the key is physically too much on the left and my thumb finger needs to bend to get there.

Some things I tried:

Can this be done? In other words, is there a way to have the command key be meta in emacs and yet have command-tab still switch between tasks system-wide?

In non-windows mode, changes to ns-* variables (such as ns-alternate-modifier and ns-command-modifier) are ignored. In particular, if the -nw option is passed as argument to emacs, the logic that propagates changes to ns-* variables (implemented in src/nsterm.c) is not evaluated. See the call to init_display in the src/emacs.c in the Emacs 27.1 source code. Roughly, it'll evaluate stuff from nsterm.c only if the window system is not inhibited (controlled by the inhibit_window_system variable which is set if the -nw flag is passed) and otherwise rely on src/term.c. If the window system is inhibited, the ns-* variables will still be visible - this is because syms_of_nsterm is invoked regardless of the inhibit_window_system variable at emacs.c:1930. The variables are there but have no bearing on the actual key mappings.

As such when windows are inhibited, attempting to resolve this with ns-* is a dead end. Iterm2 and its remapping features can be of help here until there's a better way: 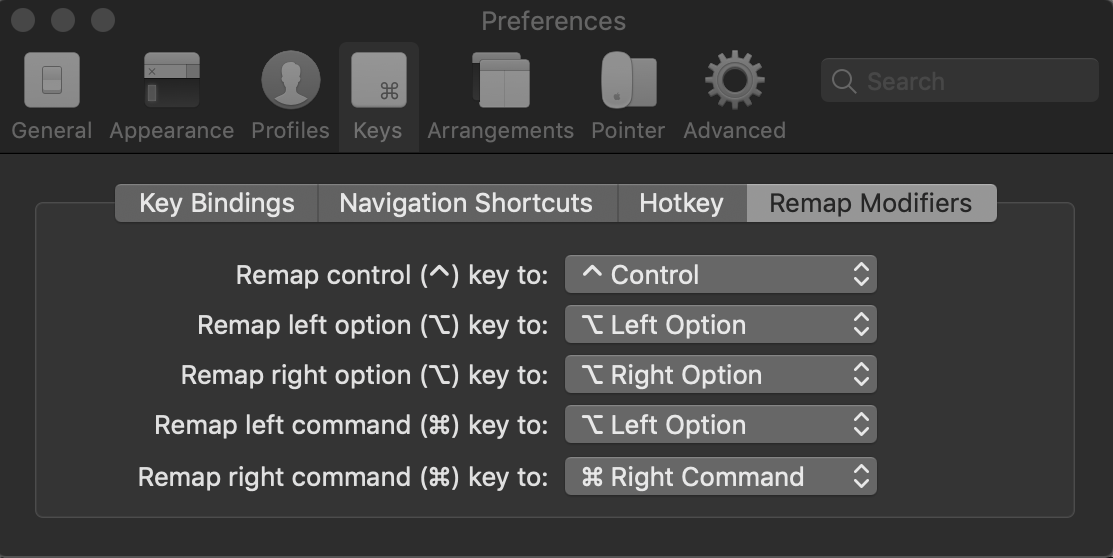 Not the answer you're looking for? Browse other questions tagged key-bindings keyboard-layout or ask your own question.

8
How to preserve emacs key bindings when changing keyboard layout?
6
Bind a modifier key (like right shift) to a command?
1
"ESC" no longer works as meta; how can I restore functionality?
2
Umlauts in Emacs on Mac
1
How can I bind a command to the F1 key?