How do I search for "foo bar" ignoring comments and newlines in emacs? For example, given the tex file fragment

I'd like to be able to type "foo bar" at the emacs search prompt and have my cursor land at the end of "bar" in the third line.

Qualification: I'm actually using Aquamacs in OS X, but hopefully a good answer for emacs would carry over.

It wouldn't be a full solution unless your comment marker character could never occur in any other context (e.g. the string "100%").

For testing select a window of the buffer with the test text, call M-: and paste the following lisp snippet into the minibuffer.

The following figure shows the matches in an extended test text for an isearch starting at the beginning of the buffer. 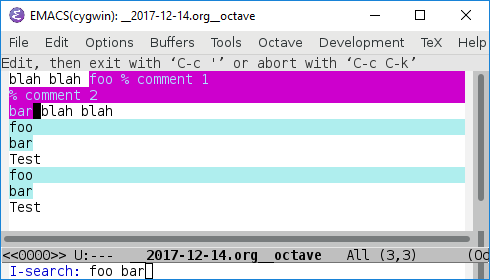 If you use library hide-comnt.el then you can hide or ignore comments, including for searching (Isearch or Lisp searching).

If the region is active then the effect is limited to the region.

If you use library Icicles then you can use Icicles search to do the following:

The following lisp code provides the command isearch-visible. It creates a clone of the current buffer and deletes all invisible text there. All isearch operations in the original buffer are then delegated to the clone.

Therefore, you can use Drew's hide/show-comment command from the package hide-comnt.el to hide the comments in your TeX buffer.

Afterwards you can search the visible text as the invisible text never existed with isearch-visible.

If you set search-whitespace-regexp to [[:space:]\n] and use M-x isearch-toggle-lax-whitespace you can use foo bar as search string with isearch-visible in your test TeX buffer to get what you want.

If you want to try the code just paste it into your init file and restart emacs.

Library Isearch+ lets you do this in several ways.

All of these suffer from what is currently a fundamental limitation of Isearch filtering: search hits have to be entirely within the text that remains after filtering, but search itself matches all of the text. See Emacs bug #27896 for a description of the problem. It would be good for someone to provide a solution.

Call me old fashioned, but I would just use standard emacs regexp search

That’s off the top of my head. I will test it in emacs tomorrow - I don’t have emacs on my iPhone :-(.

I use isearch-forward-re to the exclusion of all else. Standard key binding C-M-s. You might prefer re-search-forward.

→ comment to end of line, followed by a newline and whitespace at beginning of line.

The funkiest part is the newlines in the regexp. I get them by typing C-q (quote-char) followed by C-j, since C-j is newline.

If all of the above is in an elisp string, then the backslashes will have to be doubled, and you can use \n for a newline.

In the really old days I might have typed [ blank tab ]* - which is illegible. Now I usually remember to type \s-*. But note that syntax class tables can vary.

Modern emacs uses character classes like [:blank:] for tab and space, or [:space:] for any whitespace including tab and space and newline.

So my original regexp might be more readable as

The trick here is that I don’t know of any easily readable version of “any character except newline”, so instead I do a group of ( any blanks followed by any non-spaces ), which is equivalent when starred,

Not the answer you're looking for? Browse other questions tagged search comment newlines or ask your own question.