When running emacs maximized on my new screen, a black shadow at the bottom, that for normal viewing angles is just a few pixels wide, interfers with the readability of the minibuffer / echo area.

Is it possible to add some margin at the bottom of the minibuffer / echo area? This would act as a workaround to the problem.

Source of the Issue (cannot be solved)

My new (glossy) LCD/LED TV shows a pronounced black shadow at the bottom of the screen whose change as I look from a lower or higher angle -- it vanishes when I look vertically at the bottom edge -- makes it look as if there is a visible border behind the plane of the pixels. My guess is that this is caused by a significant (looks like some mm) distance between pixel plane and backlight plane. The same effect appears for my office screens but is much weaker there as they are smaller and matte, so I never noticed it until explicitly looking for it.

From this I conclude that it is (1) an unavoidable property of all (non-IPS?) LCD screens (2) normally not noticable unless abusing a TV as large computer monitor. Therefore I consider the hardware-issue unsolvable and need a workaround.

First calculate your frame width and add margin to minibuffer.

Now if you run M-x, it will be like this 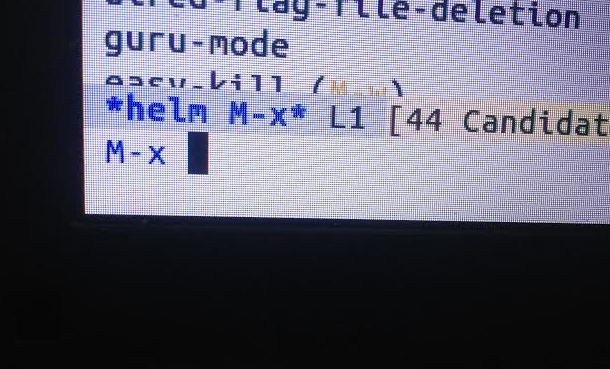 OK, try this. You can change the value of the (buffer-local) variable line-spacing. To exaggerate, I chose 2 character heights extra. See C-h v line-spacing -- you can specify pixels to add or a decimal multiple of char heights to add.

Unfortunately, that doesn't seem to work. It seems that line-spacing affects only the text between lines -- it adds the extra space after each line. You can make it add space above the line also, but apparently only by putting text property line-spacing on a newline char.

Not the answer you're looking for? Browse other questions tagged minibuffer echo-area customization or ask your own question.